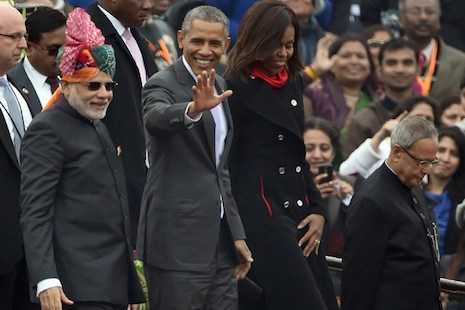 By Bhuvan Bagga for AFP, Delhi

Muslim and Christian leaders warned of growing fear Friday among India's religious minorities after US President Barack Obama said Mahatma Gandhi would have been shocked by communal violence in the mainly Hindu country.

Only days after warning in Delhi about the need to promote religious tolerance, Obama invoked the memory of India's independence icon to drive home a similar appeal during a speech in Washington on Thursday.

While praising its "magnificent diversity", Obama then described India as a place where "religious faiths of all types have, on occasion, been targeted by other peoples of faith, simply due to their heritage and their beliefs".

Such "acts of intolerance ... would have shocked Gandhiji", added Obama in comments that made front-page headlines in Indian newspapers on Friday.

The issue of religious freedom in India — an officially secular country — has become particularly contentious since the election last year of Prime Minister Narendra Modi, a fervent Hindu nationalist.

Obama's comments came on the same day that a protest in Delhi by Christians to denounce a spate of attacks on churches ended in clashes with police that saw a nun knocked to the ground in the violence.

John Dayal, spokesman for the United Christian Forum for Human Rights, said the unease about religious intolerance in India was growing and the nature of Obama's comments was particular striking.

"The entire world is speaking about the fears of religious minorities in India," said Dayal. "For President Obama, this is as direct as he can get."

Father Dominic Emanuel, the spokesman for the Delhi Catholic Archdiocese, said that India needed to face up to the "reality" that different religions were attacking each other.

"I don't think anyone will disagree with what he has said as he has said it for all and it is the reality in India," he told the NDTV network.

Mirwaiz Umar Farooq, the chief cleric in India's only Muslim majority state of Jammu and Kashmir, said it was "disturbing" that Hindu hardliners were becoming more powerful under Modi and were spreading "a feeling of insecurity among religious minorities".

"There is no denying the fact that divisive Hindutva forces are gaining strength in India," he said. "This is a dangerous trend. The world will do better to see it for what it is."

Modi was persona non grata in the US for a decade following anti-Muslim violence that left at least 1,000 people dead in Gujarat, where he was state chief minister before winning the 2014 general election.

He has also been criticized for failing to speak out against a BJP lawmaker who called for Hindu women to have at least four children to "protect" their religion and supported a recent spate of "re-conversions" to Hinduism.

Around 80 percent of India's 1.2 billion population is Hindu but it is also home to large numbers of Muslims, Christians and Buddhists.

While there was no immediate comment from Modi's government, a spokesman for the BJP said that Obama's comments should not be interpreted as a reference to any particular religious group.

"I think he is talking about general intolerance in our society," GVL Narisimha Rao told NDTV.

"A similar intolerance of a similar order or perhaps even higher order exists in the US, the biggest democracy in the world." AFP