There are occasional rays of hope amid the gloom but at the moment, there is reason to be pessimistic 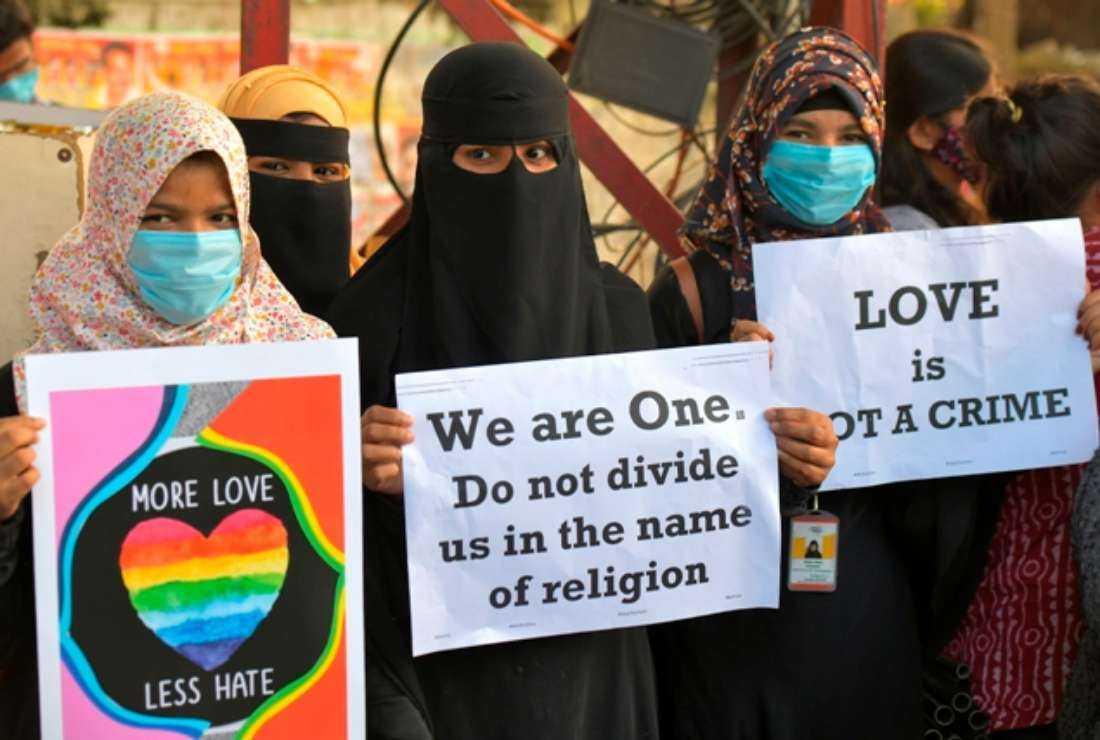 Indian activists hold placards during a demonstration condemning the decision of various Bharatiya Janata Party-led state governments in the country for passing laws against the so-called 'Love Jihad,' in Bangalore on Dec. 1, 2020.  (Photo: AFP)

The fate of the 70-year-old struggle of India’s converts from its erstwhile “untouchable” castes in the Hindu hierarchy may well be in the hands of a former chief justice of the Supreme Court.

Chief Justice K G Balakrishnan while in office had asked Church leaders if they were willing to say on oath that they exercised caste discrimination in their congregations. There was silence in the courtroom.

He was at that time hearing appeals against Article 341 Part 3 which assures affirmative action including scholarships, jobs and political representation to this group of citizens as long as they remain Hindu. If they convert to Christianity or Islam, they lose the benefits.

The converts may also be jailed if the government discovers that they had studied in Church schools on scholarships given to Christian students.

Justice Balakrishnan was the first Dalit, as the former untouchable castes now call themselves, to become the chief justice of India. His elevation was the direct result of a question raised by former President K R Narayanan, the first Dalit to hold such a high office, on why people oppressed for 3,000 years in India’s ancient religious social governance system, could not occupy high statutory offices.

Dalits who embraced other religions were denied the benefits of affirmative action by presidential order in 1950, which later became Article 341(3), due to pressure from Hindu upper castes that feared a large-scale exodus of Dalits to Islam or Christianity.

Ironically, six years after helping create India’s secular Constitution, Dalit icon Dr. B. R. Ambedkar led half a million Dalits into renouncing Hinduism and joining a reformed Buddhism in the city of Nagpur in 1956.

Nagpur is the headquarters of the Rashtriya Swayamsewak Sangh (RSS), the militant Hindu majoritarian organization, seeking to create a Hindu nation, which will disenfranchise Christians and Muslims.

The constitution was later changed to ensure that Buddhists and Sikhs, defined as Indic religions because they were founded in this land, get the scheduled benefits given to Hindu Dalits.

Justice Balakrishnan was recently named by the Narendra Modi government to head a committee set up to examine the issue of caste transcending religion once again.

An earlier commission, headed by another former Chief Justice Ranganath Misra had found that caste and caste discrimination indeed transcended religion and that Dalit Christians and Muslims must get the same benefits as given to their Hindu, Sikh and Buddhist brethren.

The Congress government of the time did not respond to the Supreme Court notices. The RSS-affiliated ruling Bharatiya Janata Party (BJP) is more categorical in rejecting any privilege for Dalit Christians and Muslims.

In fact, they want such privileges to be taken away from indigenous people, known as Adivasis, hoping this will stop all conversions.

The move to stop conversions is top of the BJP’s political agenda.

Religious minorities are aghast that barring regional parties like Dravida Munnetra Kazhagam (DMK) in southern Tamil Nadu, no major political group is supporting their cause. No one, it seems, is willing to antagonize the Hindu vote.

The bogey of conversion has led to much persecution of the Christian community. While the Catholic Church has seen its institutions and parishes under attack, the Protestant and evangelical churches find their pastors arrested, house churches attacked, and small isolated communities ostracized. In some cases, they have been denied drinking water, grain, employment and even burial for their dead.

The cue has been picked up by the Supreme Court itself with several writ petitions filed by minority groups challenging Article 341 (3), or seeking other directives to ensure that India and its constitution do not lose their “secular” character.

“Secular” in India means the state does not show preference toward any religion. Although much diluted by anti-conversion laws in a dozen states and rules feeding into rampant Islamophobia, the states still remain largely untainted by religious bias. But for how long is the critical question before Church leaders and civil society.

Last week, a bench of the Supreme Court set Nov. 28 for a hearing on why exactly conversions out of Hinduism pose a threat to national security after being petitioned by the redoubtable Advocate Ashwini Kumar urging stringent steps to control fraudulent religious conversions through “intimidation, threatening, deceivingly luring through gifts and monetary benefits.”

Kumar has in the past filed similar petitions calling to protect the majority community’s interests in a variety of ways.

The apex court seems to agree with the petitioner, and in an initial order, described incidents of “forced religious conversions” as “posing a serious threat to national security” while seeking sincere efforts to check the practice.

The bench warned that a “very difficult situation” will arise if forced religious conversions are not stopped.

The Christian community has not responded so far to Kumar’s petition, though they certainly should be aware of it.

Civil society holds the hope that DMK leader and Tamil Nadu Chief Minister M K Stalin may respond in court with data to prove that conversions are voluntary and pose no threat to national security.

India’s federal government knows there is almost no data on forcible and fraudulent conversions. There is hardly any data even on voluntary conversion as citizens are not asked questions about their religion at birth and at the time of the census.

There are no recorded court convictions of Christians for forcibly or fraudulently converting anyone. In fact, almost every pastor jailed on complaints of the RSS affiliates or others has been found not guilty.

A few Muslim youths are facing the wrath of the police in states such as Karnataka, Uttar Pradesh and Madhya Pradesh because they married or eloped with Hindu girls, an act termed "Love Jihad" by political groups and governments.

"The National Crime Records Bureau hesitates to record sectarian violence, or in fact any violence in terms of the religions of the victim and aggressor"

There is no officially declared definition of “force,” “allurement” and “fraud,” other than what can be derived from the criminal codes or the local laws.

For the RSS and some governments, the statement attributed in the Bible to Jesus that “no one goes to the Father other than through me” is both intimidation and fraud.

Others hold education and medical care extended to the poor as allurement.

Violence is well defined in the Indian Penal Code and the Criminal Procedure Code along with state responses. But the National Crime Records Bureau hesitates to record sectarian violence, or in fact any violence in terms of the religions of the victim and aggressor.

BJP leaders and Hindu spokespersons cite census data to say the Hindu population has dipped below 80 percent while the population of Muslims is growing. The Christian population, officially, is static at about 2.3 percent.

The BJP says Hindus are in danger of becoming a minority in the land of their birth.

There are occasional rays of hope amid the gloom.

In Madhya Pradesh recently, the high court found the provision requiring interfaith couples to declare a change of religion before a government official as “prima facie unconstitutional” and said the ability to choose one’s faith and the choice whether to express it or not is implicit under Article 25 (Freedom of Religion).

Last year, the Gujarat High Court stayed certain operative sections of the Gujarat Freedom of Religion (Amendment) Act, 2021, observing that they infringed upon Section 21 (Right to Life and Personal Liberty).

But at the moment, there is reason to be pessimistic.