India's politics of beef shows its violent side 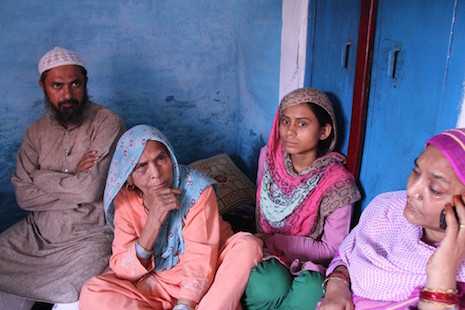 The family of Akhlaq Ahmed, who was killed by a Hindu mob after he was suspected of keeping beef, at the family's home in Uttar Pradesh state. (Photo by Bijay Kumar Minj)

Sitting in the corner of a small dark room, Ikrana Ahmed is mourning the death of her husband. She is still trying to come to terms with the fact that a violent Hindu mob killed him because he was suspected to have eaten beef.

"A group of Hindu men barged into the house and dragged my husband and younger son outside alleging that the meat we had stored and consumed in the house was beef," Ikrana told ucanews.com.

The mob hit both the men with bricks, sticks and whatever they could grab. "My husband died on the spot and my son is on a ventilator fighting for life," she said.

Some Hindu men suspected that Akhlaq had slaughtered a cow and consumed its meat during the celebration of the Muslim festival of Eid al-Adha.

The cow is considered sacred in the Hindu religion, India's majority religion, and 24 of the country's 29 states have various regulations prohibiting either the slaughter or the sale of cows. Moreover, the western Indian state of Maharashtra and northern Haryana banned the sale of beef earlier this year.

Ikrana said the case against her family was fabricated. She wants the government to find the truth behind the murder. She said they would never dare to kill something revered holy by Hindus.

"If the cow is holy for them, it is holy for us too," she said, adding that the meat recovered from their house was mutton, not beef.

Pressure for a national law

The murder in Bisahra village comes as some Hindu groups are demanding a nationwide law against the slaughtering of cows. The push for the law gained momentum after the pro-Hindu Bharatiya Janata Party came to power in New Delhi in May 2014.

In March, Indian Home Minister Rajnath Singh stressed the government's commitment to a nationwide prohibition on beef, saying: "How can we accept that cows should be slaughtered in this country? We will do our best to put a ban on this, and we will do whatever it takes to build consensus."

Addressing a gathering of Jain ascetics, Singh said Madhya Pradesh and Maharashtra states, both ruled by his party, have banned cow slaughter and that no one should doubt the government’s commitment in this regard, Indian media reported.

In August, the High Court in India’s only Muslim majority state, Jammu and Kashmir, ordered a complete ban on the sale and purchase of beef. The Bharatiya Janata Party is part of the state's coalition government.

Penalties for slaughtering cows vary in states where it is illegal. Gujarat, for instance, sets a maximum seven-year jail term and a 50,000-rupee (US$770) fine, whereas in the capital city, New Delhi, it’s a maximum five years in jail and 10,000 rupees.

Many of India's Muslims, Christians, dalit and indigenous people consider beef a vital part of their diet because it is a cheaply available protein. Many among them see the ban on beef as a Hindu cultural imposition.

"The government will do better if it directs its attention toward much larger national issues rather than making laws on the diet of the people," said Cardinal Baselios Cleemis Thottunkal of Trivandrum, president of the Indian bishops’ conference.

The cardinal told ucanews.com that the government faces more pressing issues, including the plight of farmers, education and the country's poor infrastructure. Indian activists shout slogans during an Oct. 6 protest in New Delhi calling for an investigation into the killing of Akhlaq Ahmed, whose death has fueled concerns that religious intolerance is growing under the pro-Hindu Bharatiya Janata Party government. (Photo by Sajjad Hussain/AFP)

For India's 180 million Muslims, who comprise 14 percent of India’s population, the ban is an interference in their religious affairs.

"How could anything which is lawful in our religion be declared unlawful by any government? We are living in a secular country where every person has a right to practice his or her religion. Beliefs cannot be forced on anyone," said Moulana Javid Ahmad, a Muslim cleric in Kashmir.

Professor Altaf Khan, a Muslim intellectual in Kashmir, said the ban on beef would trigger more radicalization of his state's youth. "The young people would see it as a religious obligation to fight this move of the government," he told ucanews.com.

In the ancient agrarian communities of India, cows and bulls were seen as symbols of wealth, historians say. But in later history the cow was used as a symbol to unify Hindus.

As political discussions continue on the need for a ban on cow slaughter, India's media have been discussing if the country, one of the world’s largest exporters of beef, can afford a prohibition.

India exported animal products worth some US$5 billion in 2014-15, the majority of which was the meat of water buffaloes, not cows, according to data from the Agricultural and Processed Food Products' Export Development Authority of India. The amount is almost equal to the health allocation in the national budget.

According to data from the U.S. Department of Agriculture, India is projected to export 2.4 million tons of beef this year, accounting for some 24 percent of the 10.2 million tons of global exports.

Indians also are the seventh largest beef consumers in the world, according to data published in Indian media. In 2012, India produced 3.64 million tons of beef, of which 1.96 million tons, more than half, were consumed in India.

People like Arif Qureshi, a student of economics at Delhi University, say the ban is impractical as it will adversely affect the Indian economy and render thousands jobless.

"There are people associated with the trade for decades in various states of India. Banning beef would mean the closure of the leather industries, denying employment opportunities to thousands and above all making minorities less secure and more marginalized," Qureshi said.

The opposition Congress Party leader, Ghulam Nabi Azad, opposes the ban and says his party will support a move to scrap the law in Jammu and Kashmir.

"The ban has left people of the state angry. It has become a very sensitive issue for the whole country, especially for Kashmir," he said. A mob ransacked Akhlaq Ahmed's home, including this fridge in which Akhlaq had been accused of storing beef. (Photo by Bijay Kumar Minj)

Back in Bisahra village, Ikrana Ahmed is living in fear after her husband's killing.

The attack has driven a wedge between the village's Hindu majority and its tiny Muslim minority. Muslims number just 200 among 15,000 Hindus.

"We feel scared in this village now," Ikrana said. "They can come anytime and kill us. We do not want to stay here."

Local Hindu leaders like Abhishek Sisodia regret that the killing has disturbed peace and unity in the village. Hindus built the village mosque on their own land. "What more evidence does anyone need of the love between the two communities?" Sisodia asked.

"A void has developed between Hindus and Muslims in the village now, which will take years to fill," he said.