Newly canonized St. Mariam Thresia of Kerala has been projected as the saint for Indian Catholics to follow 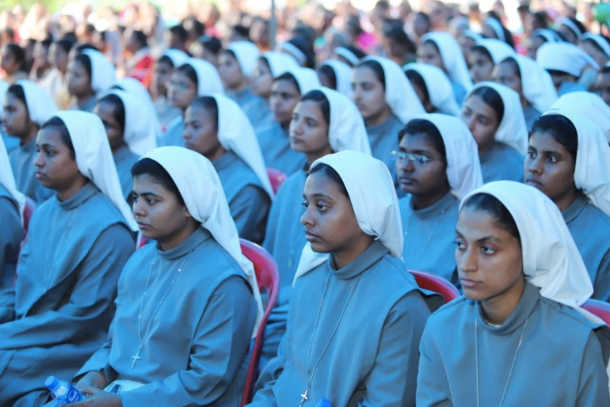 Nuns of the Holy Family Congregation based in southern India's Kerala state attend a national program on Nov. 16 to mark the Oct. 13 canonization of their founder St. Mariam Thresia. (Photo supplied)

Some 30,000 Indian Catholics, including three cardinals, joined a Mass and public function to give thanks for the life and work of newly canonized St. Mariam Thresia at her tomb in a Kerala village on Nov. 16.

More than 30 bishops and about 600 priests and nuns joined the national celebration in Kuzhikkattussery village, which houses the nun's tomb. The area now comes under Irinjalakuada Diocese of the Eastern-rite Syro-Malabar Church.

Eucharistic celebrations used Syrian, Hindi and English besides the local Malayalam language for prayers, reflecting the spirit of the national-level celebration.

The Syro-Malabar Church, which follows Syrian liturgical tradition, continues to regard Syrian as its liturgical language. Hindi and English are used as languages to communicate between Indian people, who would not understand Kerala's Malayalam language.

Celebrations and speeches stressed the saint's cultural and linguistic affinity with the local people, projecting her lifestyle as one for Indians to follow.

St. Mariam Thresia "is a saint of our courtyard," said Cardinal Cleemis, explaining that the nun was born in an ordinary village and lived mostly with her family.

She was born in Thrissur district's Puthenchira village on April 26, 1876. She wanted to become a nun but lived mostly in her own house because she could not find a congregation that worked for families.

In 1914, she founded the Holy Family Congregation dedicated to working for families and became its first member.

The nun mostly lived in her own home until the congregation was founded but engaged in house visits, helping broken families and educating women. She died on June 8, 1926, aged 50, and was declared venerable on June 28, 1999. Pope John Paul II beatified her on April 9, 2000. "St. Mariam Thresia is an inspiration for all of us to be more close to the needy and marginalized," said Bishop Pauly Kannookadan of Irinjalakuda. He said that following the "prayers, life and social consciousness of the saint will make Catholic life more vibrant."  Her intense prayers helped receive stigmata, or the appearance of a bodily wound corresponding to the crucifixion wounds of Jesus Christ, but that was kept secret, according to Vatican documents on the nun.

"The nun showed extraordinary courage to venture out of her home and help poor families," the bishop said.

"She interacted with people freely, helped those in need and consoled those in need at a time when it was not possible for a woman to go out alone or speak to strangers," Bishop Kannookadan said. "The daring nun not only broke such a taboo but also started the first school for girls in her parish. She was all for empowering women and girls. At heart, she was a mystic who spent a lot of time in prayer and before the Eucharist."

To mark the canonization, Holy Family Congregation, Irinjalakuda Diocese and the saintly nun's family have together established a fund of US$1 million for charity. The congregation will share more than 70 percent of the funds, he said.

The charity project was launched during a public function organized after the Mass. State ministers, religious leaders and officials attended the event.

The project involves building homes for the homeless, funding for poor girls and assisting poor patients and marginalized families.

St. Mariam Thresia became the seventh Indian saint including Portuguese-born Franciscan Brother Gonsalo Garcia (1556-97), canonized in 1862, as the first one.