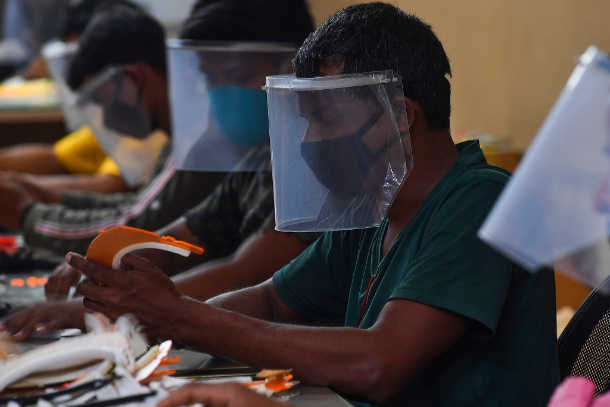 Staff prepare face shields for local authorities at the Folds Design Studio in Navi Mumbai on April 14 during India's nationwide lockdown as a preventive measure against the spread of coronavirus. (Photo: Indranil Mukherjee/AFP)

Church leaders, activists and lawyers are urging the Indian government to take action after a state-run helpline received more than 92,000 calls from women and children facing domestic abuse during the coronavirus lockdown.

The deluge of calls from victims seeking protection from their abusers during the first 11 days of the lockdown indicate that it has turned into extended captivity for many women and children trapped with their abusers at home, reports said.

“There is no doubt that during the lockdown violence against women and children has increased manifold, which the government is aware of and even the media has reported,” Sister Lucy Kurien, founder and director of Maher, a community and interfaith organization for abused and destitute women and children, told UCA News.

“There are several reasons for the increased violence during this period — alcoholism, uncertainty, insecurity, debt and irritation due to being unable to leave the house.

“Unlike normal times when men are free to go anywhere, socialize and do their jobs, now they are confined to one place, making them more aggressive. Under normal circumstances, women and children have the option to go out and spend time with friends.”

Sister Kurien belongs to the Sisters of the Cross of Chavanod. Maher assists destitute women and children irrespective of caste or creed. It is also open to the mentally challenged, those with HIV, old women and street children.

Childline 1098 received 307,000 calls from March 20-31, of which 30 percent were about abuse and violence against children, said Harleen Walia, deputy director of Childline India.

She said that after the lockdown was announced by Prime Minister Narendra Modi on March 24, the number of calls jumped by 50 percent.

The data was shared with officials from the Women and Child Development Ministry during an orientation workshop for child protection units on April 7. The seminar focused on coronavirus-related issues and ways to reduce stress among children during the lockdown.

Walia added thast many women who are victims of domestic violence are more vulnerable during the lockdown.

Rekha Sharma, chairperson of the National Commission of Women (NCW), said domestic violence complaints have increased on a daily basis since the nationwide lockdown was imposed.

Between March 24 and April 1, 257 complaints related to various offenses against women were received. Of that amount, 69 were related to domestic violence, the latest data released by the NCW showed.

Sharma said the number of cases of domestic violence must be much higher but women are scared to complain due to the constant presence of their abusers at home.

Victims facing the lockdown with their abusers cannot access mobile phones, have limited access to financial resources and social networks and often lack the courage to call for help.

According to the Crime in India Report 2018 published by the National Crime Records Bureau, every 1.7 minutes a crime was recorded against women, every 16 minutes a rape was committed and every 4.4 minutes a child was subjected to domestic violence.

Research suggests that the memory of abuse persists long after the violence has stopped. This often results in chronic health problems and developing the risk of many diseases that arise from prolonged stress.

An alliance of six child development organizations asked the government to provide uninterrupted access to critical services for the most vulnerable children and their families.

Two lawyers from the Supreme Court have written a letter to the Chief Justice of India requesting him to take suo motu (on its own) cognizance of the increase in the number of child abuse cases during the lockdown.

“The lockdown was necessary to combat Covid-19, but in its hurry to implement the measure the government has failed to address domestic violence and abuse,” said Father Savarimuthu Sankar, spokesman for the Archdiocese of Delhi.

“The government must also address the issue of domestic violence during this critical time because it is equally important, otherwise we may even lose some precious lives.”