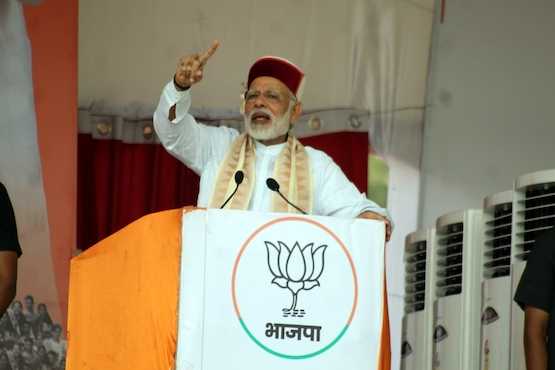 India’s ruling Bharatiya Janata Party (BJP) is treading a fine line in promoting its pro-Hindu nationalist agenda while trying to court voters in Christian strongholds in the northeast and south.

Prime Minister Narendra Modi and several of his BJP leaders have been criticized for creating policies that push for a Hindu cultural and religious hegemony. Among those are national laws to ban beef and restrict conversions, moves that will inevitably drive religious minorities away from the party.

But ever mindful of placating religious minorities, the party has adopted different strategies tailored to different areas, and embraced Christian politicians in key states.

For example, the BJP has decided to go soft on the beef ban in the northeast and the southern state of Kerala where Christian votes are key to winning seats and the policy was unpopular.

The mollifying strategy of the BJP is also visible in the Christian-majority Meghalaya state, which is due to stage provincial elections next February. The BJP only holds two seats in the  60-seat state legislature and must tap into the voter base of Christians who account for 83 percent of the state’s 3.2 million people.

The Indian National Congress holds half the seats in house, but both the Congress and the BJP will be relying on support from regional groups trying to garner support for local issues and ethnic groups.

Horse-trading with smaller parties and splinter groups is an old political trick the BJP has employed in the past. Since 2014, the BJP has successfully formed a ruling alliance in the Christian stronghold of Goa on the western coast through such a strategy. At one point, it even had a Christian deputy chief minister in Goa.

Recently, Modi unexpectedly named Alphons Kannanthanam, a Catholic from Kerala, in his cabinet. Christian leaders were quick to note it was a vote-seeking move ahead of the 2019 general elections, when the BJP will need Christian votes to win seats in the state.

A week after Kannanthanam was made a minister, the BJP president Amit Shah appointed him as the party’s election chief for Meghalaya. The message was clear: the BJP promotes Christians.

The BJP is faced with multiple challenges in Meghalya where the state’s three major ethnic groups – the Khasis, Jaintias and Garos – are mostly Christians who consume beef as a dietary staple.

"The move for a beef ban has affected the BJP immensely," said a local Khasi Christian leader, K. Barnabas. "The BJP will fail to capture power in Meghalaya. Unlike other northeastern states, people have not accepted the saffron party," he said referring to the BJP's political colors.

The BJP will face strong competition from the Congress party, which has traditionally  been popular in the state.

"It had no political agenda. It was a social gathering of intellectuals, and Christians were part of that group,” said a Shillong- based Christian leader who attended the meeting.

If the BJP can make headway in Meghalaya, it is only natural they will move on to Mizoram and Kerala.

The increased acceptability of the party in these states will help it shed its image as a Hindu nationalist party and adorn the colors of secularism.  They key question is whether Christians will help the BJP's image transformation?