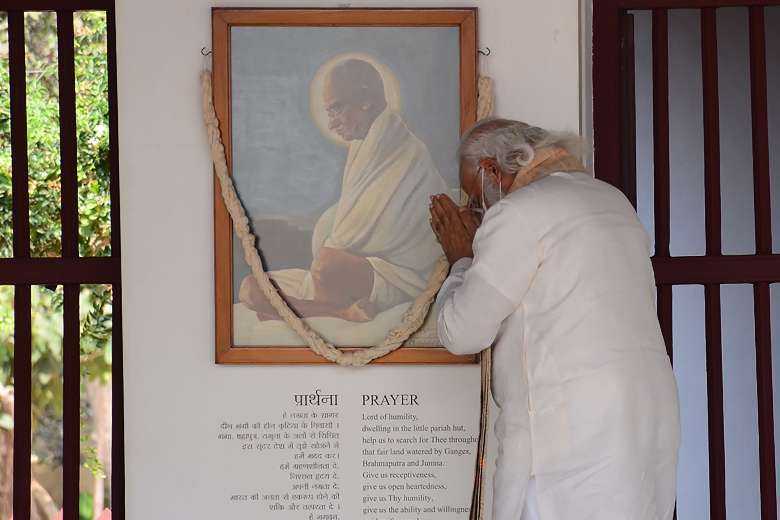 Indian Prime Minister Narendra Modi pays his respects in front of a portrait of Mahatma Gandhi during his visit to Gandhi Ashram in Ahmedabad, Gujarat, on March 12, 2021. (Photo: AFP/Gujarat Information Department)

Political speculation about the emergence of a possible challenger to India’s pro-Hindu ruling party is rife even before the dust settles after the latest round of polls in five provinces.

The western state is known as the original bastion of the Bharatiya Janata Party (BJP), a laboratory of its Hindutva movement seeking to establish the hegemony of Hindus and Hinduism in India.

The election results in Gujarat will decide the future course of Indian politics, political pundits believe.

Modi’s BJP has enjoyed uninterrupted power here since 1995 while the opposition Congress party has virtually been reduced to an also-ran in the state.

Many are hoping the BJP’s hegemony over Gujarat could be challenged by the Aam Aadmi Party (AAP), or the Common People’s Party, which has been in power in the capital territory of Delhi since 2015 and captured the neighboring state of Punjab at the just concluded polls.

“This is politically vital. Once common people feel you or your party can fight the existing system, it gives hope of a possible electoral battle”

AAP’s convincing defeat of the ruling Congress in Punjab has propelled the party and its leader, Delhi Chief Minister Arvind Kejriwal who started out as a crusader against corruption, into the forefront.

AAP has already launched its poll campaign in Gujarat hoping to exploit the anti-incumbency factor against the BJP, which was compelled to change its chief minister last September to arrest growing resentment in the state.

AAP posters are a familiar sight across urban centers like Ahmedabad, Surat, Rajkot and Junagadh. It did well at the 2021 municipal polls in Surat city, winning 27 seats against the BJP’s 93. The Congress was reduced to a zero in India's diamond-polishing hub.

AAP has successfully captured the Indian middle classes’ imagination for well over a decade.

“This is politically vital. Once common people feel you or your party can fight the existing system, it gives hope of a possible electoral battle,” said Pravin Chowdhry, 58, a resident of the Law Garden area in Ahmedabad, the principal city of Gujarat.

Chowdhry admitted he has been voting for the BJP, but said he "may think otherwise provided a good candidate from a suitable political formation enters the fray this time.”

Asked about AAP, he said his grandchildren were regular recipients of AAP’s political messages through social media.

Even rivals BJP and Congress are talking about AAP as an emerging political force.

In the last state polls held in 2017, the Congress had surprised the Modi-Shah duo by reducing the BJP to 99 legislators in the 182-strong Gujarat Assembly.

“It is the people who will decide who gets to rule and who sits in the opposition. Even when it comes to deciding the opposition, some people may still think of Congress, others may not”

But the Congress has since weakened both in state and national politics. Its political strategist from Gujarat, Ahmed Patel, passed away last year and the party is yet to find an alternative.

But he dismissed the speculation over AAP’s emergence as an alternative to his party as “a clever design to dismiss the Congress from the race.”

“There is a possible BJP-AAP nexus at work here,” he added.

Chief Minister Bhupendra Patel does not believe in taking chances in elections. “In a democracy, any party can pose a challenge. There is a lot of hype around AAP but we won the local body polls in capital Gandhinagar [held in October 2021], snatching 41 out of 44 seats,” Patel told UCA News.

He said Modi’s charisma and the party workers' daily toil even during the coronavirus pandemic had further endeared the ruling BJP to the common people.

“It is the people who will decide who gets to rule and who sits in the opposition. Even when it comes to deciding the opposition, some people may still think of Congress, others may not,” said the chief minister.

Christians are in a microscopic minority and electorally cannot make much difference. Overall, the BJP's image has been anti-Christian and there have been issues over religious conversion.

In a much-publicized latest event, a case of religious conversion has been filed against Missionaries of Charity nuns in Gujarat.

The charges ultimately came a cropper with the prosecution admitting there was no serious basis to proceed against them. Early this year, the prosecution gave a written undertaking to a court that it would not pursue the case any further.

The Congress’s state leaders believe it is the BJP that is propelling AAP in Gujarat.

“Somebody is helping them. That somebody may be sitting in Delhi,” said Hardik Patel, the working president of the Congress’s state unit, alluding to Amit Shah.

Patel pointed out how AAP gets to raise its banners in public places for 45 days or even longer, whereas those of other parties are taken down within days by the ruling party.

Some analysts agree that AAP and its chief Kejriwal have in the past played the "soft Hindutva" card by supporting the abrogation of Article 370 to end the special status of Muslim-majority Jammu and Kashmir in August 2019.

Kejriwal is also known to flaunt his Baniya (trader) caste. Gujarat too is a trader-dominated state. But whether a Baniya leader from northern Delhi will find acceptance in western Gujarat remains to be seen. Beating Modi in his own backyard would require much more than a plain, clean image.

Kejriwal tasted defeat at the hands of Modi when they were pitted against each other as candidates in Varanasi during the 2014 parliamentary polls.

In the 2019 parliamentary elections too, the BJP swept all seven parliamentary seats in Delhi despite AAP ruling the capital territory.

Kejriwal has a reputation for being arrogant and self-centered and hence averse to the emergence of an alternative power center within the party. Rumor mills in Punjab are already hinting at a possible fallout with new Chief Minister Bhagwant Singh Mann.

The BJP may still have to contend with Kejriwal’s popular Delhi "model" of development and good governance punctuated with free water, electricity and health clinics.

If it finds enough takers in Gujarat, the AAP could well hope to turn the tables on Modi-Shah’s BJP in its most loyal province.