Another male bastion falls, but not without resistance 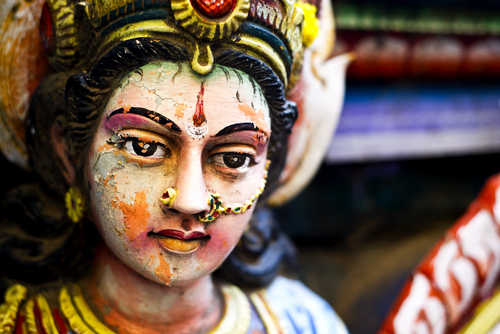 The devout are seated cross-legged with folded hands, eyes closed, repeating the mantras and verses recited by the priest, who sits behind the haze and smoke of a fire ritual. As the prolonged incantation comes to a close, devotees seek the priest's blessings.

But this priest is not the traditional dhoti swathed, head shaven, forehead ash-smeared man, but a charming, graceful and elegant woman, one of the few but ever growing clan of Hindu women priests.

V.L. Manjul, research scholar and chief librarian at Pune's Bhandarkar Oriental Research Institute, estimates that India now has around 1,600 of them. In Maharashtra alone, "some 600 women have been trained as purohits [priests]," he says.

Scholars, sociologists and theologians emphasize that no Hindu scripture prevents women from assuming the role of a priest.

The issue of women priests led headlines last week after a 900-year-old temple in Maharashtra's pilgrimage city of Pandharpur appointed one, breaking its centuries-old tradition of a male Brahmin priest leading ceremonies.

Local Brahmin families claimed ancestral rights over the temple but in January, the Supreme Court stripped their right to appoint priests and collect and keep donations. The state government then set up a managing committee, which interviewed 129 candidates from all castes before appointing a woman.

She conducts classes near her home for some 50 students, both girls and boys, teaching them the nuances of conducting rituals, ceremonies and performing religious incantations.

"Women are the torch bearers of religion and play a pivotal role in preserving religion and culture," she says.

But orthodox Hindus have voiced opposition to women priests. One male priest at a popular temple in Vashi, Megha Gokhale's neighborhood, has dismissed women in the priesthood as a fad for publicity.

"How can a woman who undergoes menstrual cycles every month be considered pure to conduct holy rituals?" he asks. "This is fad of a few misled, urban and so-called elite misguided women who, in defying religious tenets, seek only cheap publicity and to rake in the money."

Sindhu Dhadve, a resident of Kopar Khairane township, believes that most women priests would recognize this male response, as they have an agenda that seeks to impose a certain form of Hindu practice as the only valid one and is militantly hostile to anyone who differs.

Dhadve recalls how she faced resistance in her own path to the priesthood.

"Women priests are usually sidelined, nobody gives them importance," she says. But despite opposition, ridicule and social boycott from some male priests, she continued with her training, determined to express her faith.

"Thanks to the support and encouragement from my family I could continue. Now, I'm accepted and families here invite me to their religious ceremonies," she says.

"Yes, the traditional male bastion is crumbling" asserts Kalpana Vaidya, a teacher at St Xavier's School in Mumbai. "God only sees the worshiper as a devotee, not as a man or a woman. So who authorized these mortals to make a distinction?"