When the South Asian nation secured its independence from Britain in 1947, it was as a secular, multi-cultural state 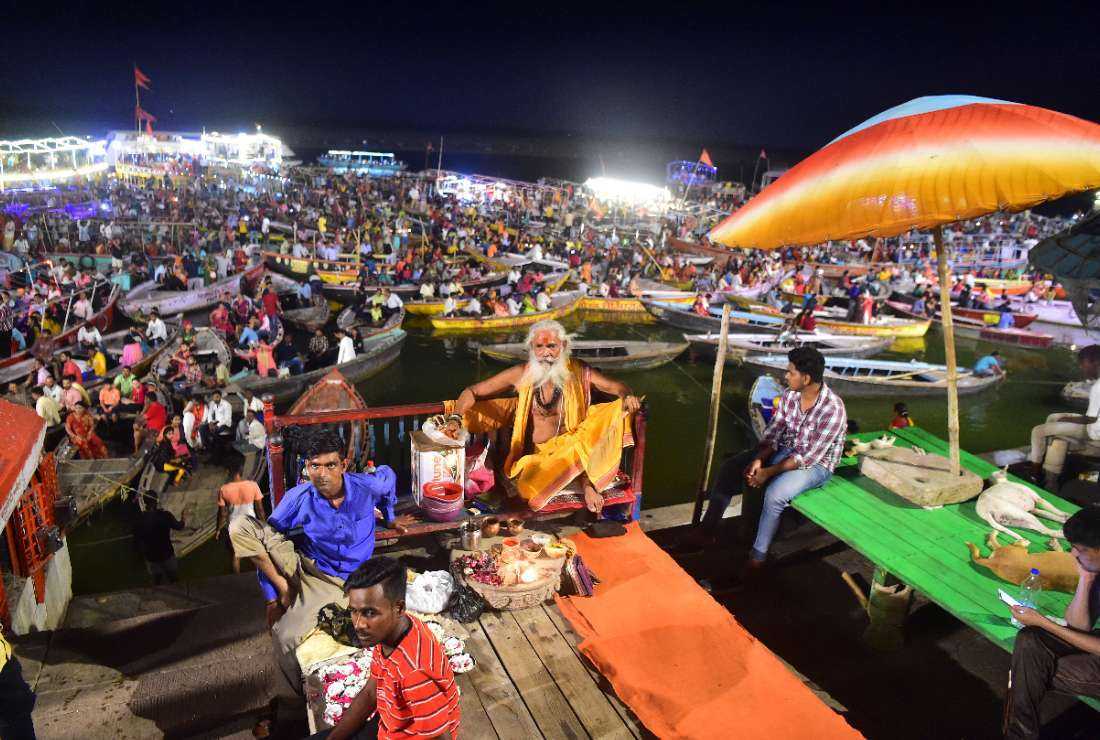 Indian Hindu devotees attend evening prayers on the banks of the river Ganges at Dashashwamedh Ghat in Varanasi, on July 8. (Photo: AFP)

The Hindu priest on the banks of the holy river Ganges spoke softly, but had a threatening message 75 years after the birth of independent India: his religion must be the heart of Indian identity.

"We must change with time," said Jairam Mishra. "Now we must cut every hand that is raised against Hinduism."

Hindus make up the overwhelming majority of India's 1.4 billion people but when Mahatma Gandhi secured its independence from Britain in 1947 it was as a secular, multi-cultural state.

Now right-wing calls for the country to be declared a Hindu nation and Hindu supremacy to be enshrined in law are growing rapidly louder, making its 210-million-odd Muslims increasingly anxious about their future.

Those demands are at the core of Hindu nationalist Prime Minister Narendra Modi's popularity, and his government has backed policies and projects across the country -- including a grand new temple corridor in the holy city of Varanasi -- that reinforce and symbolise the trend.

Gandhi was a devout Hindu but was adamant that in India "every man enjoys equality of status, whatever his religion is".

"The state is bound to be wholly secular," he said.

He was assassinated less than a year after India and Pakistan's independence and Partition in 1947, by a Hindu fanatic who considered him too tolerant towards Muslims.

And Mishra believes Gandhi's ideals are now out of date.

"If someone slaps you on one cheek," he told AFP, "Gandhi said we must offer the other one. Hindus are generally peaceful and quiet compared to other religions.

"They even hesitate in killing a mosquito but other communities are exploiting this mindset and will keep dominating us unless we change."

To many, that change is already under way, emphasised by the rhetoric of Modi's Bharatiya Janata Party (BJP) and symbolised by the big-ticket Hinduism-related projects with which it has enthused his sectarian base during its eight years in power.

A grand temple is under construction in the holy Hindu city of Ayodhya, where Hindu zealots destroyed a Mughal-era mosque three decades ago, triggering widespread sectarian violence that killed more than 1,000 people nationwide and was a catalyst for the stunning rise of right-wing politics.

The BJP has backed a $300 million, 210-metre statue off the Mumbai coast of Hindu warrior king Chhatrapati Shivaji, who successfully challenged the Islamic Mughal empire.

And nine months ago, Modi opened a grand temple corridor in his constituency of Varanasi with much fanfare, taking a televised dip in the Ganges.

He has represented the city since 2014, when he secured his first landslide national election victory, and his successes transforming its once-creaking amenities are recognised even by his critics.

But the Muslim hospital worker said he was "really worried" about his children's future.

"Unlike the past, there is also too much violence and killing over religion and a constant feeling of tension and hatred" between communities, he said.

Varanasi is in Uttar Pradesh -- India's most populous state, with more people than Brazil -- and at the forefront of the BJP's "Hindutva" agenda.

It has renamed nearby Allahabad back to Prayagraj, 450 years after the Mughal emperor Akbar changed the city's designation.

Authorities have carried out arbitrary demolitions of homes of individuals accused of crimes -- most them Muslims -- in what activists say is an unconstitutional attempt to crush minority dissent.

In Karnataka -- which saw a spate of attacks on Christians last year -- the BJP has backed a ban on hijab in schools, which triggered Muslim street protests.

Emboldened Hindu groups have laid claims to Muslim sites they say were built atop temples during Islamic rule -- including a centuries-old mosque next to the grand Varanasi corridor opened by Modi -- raising fears of a new Ayodhya.

A new wave of anti-Muslim riots was triggered in 2002 after a train carrying 59 Hindu pilgrims from the site was set on fire, and at least 1,000 people were hacked, shot and burned to death in Gujarat. Modi was the state's chief minister at the time and has been accused of not doing enough to stop the killing.

But Professor Harsh V Pant of King's College London said the BJP's rise was enabled by Gandhi's own Congress party, which ruled the country for decades.

While preaching secularism, it pandered to extremist elements in both major religions for electoral purposes, he said.

But the BJP tapped into Hindu sentiment after mobs demolished the Ayodhya mosque in 1992 and is now "central to Indian politics", Pant said.

"Everyone buys its narrative, responds to it and it feels no one else has any ideas," he said.

"They are here for the next two to three decades."

That shift is a boon to those who want to see India declared a Hindu nation, such as the right-wing Vishwa Hindu Parishad organisation.

The "double face of secularism" had "become a curse, and threat for India's existence".

"It doesn't mean everyone else has to leave," he added. "They can live peacefully but the character and ethos of India will always be Hindu."

As prime minister, Modi has largely avoided the polarising rhetoric he employed during his tenure in Gujarat, but according to critics he often ignores incendiary comments by figures in his own party.

And his actions, they say, enable calls for a Hindu nation without explicitly endorsing them.

That worries Muslims. Nasir Jamal Khan, 52, caretaker of a Varanasi mosque, said there was a "sense of growing schism" even though "our forefathers were born here".

He hopes for a day when India's elected leaders stop talking about religion, and told AFP: "I see the PM as a father in the family. It doesn't behove a father to treat his children differently."