Migrant workers are taking the virus to other parts of the country, government told 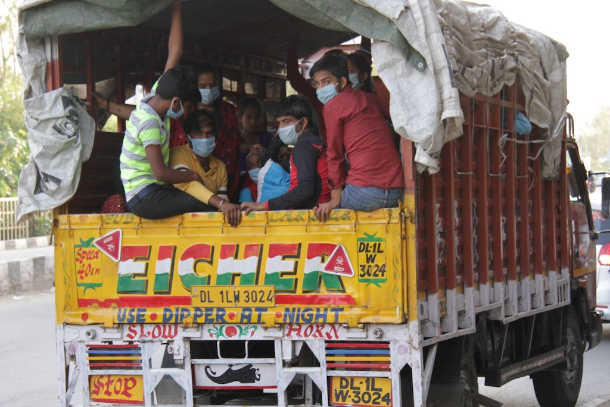 Migrant workers from Bihar take a truck to cross the Delhi-Uttar Pradesh state border at Ghazipur on May 16 to return to their homes. (Photo: Bijay Kumar Minj/UCA News)

Church health professionals and other medical experts say India’s Covid-19 crisis could have been avoided if migrant workers had been allowed to go home before a lockdown was imposed on March 25.

“I think the government could not anticipate the present scenario. The decision on lockdown was very quick, it was not well planned and there was no proper consultation with the experts,” Father Paul Parathazham, director of St. John’s National Academy of Health Sciences in Bangalore, told UCA News.

He said there was hardly any time for migrant workers to return to their home states after losing their jobs.

“Had the government planned it in a proper way, the situation could have been better because the quarantine and other centers where the migrant workers were kept were not following the government norms on social distancing, hygiene, etc.,” the priest said.

Father Parathazham said the sudden lockdown triggered a mass exodus from cities of migrant workers who are now facing uncertainty.

The medical experts’ report sent to the government stated that the lockdown was draconian and was presumably a response to a modeling exercise from an influential institution.

Subsequent events have proved that the predictions of this model were way off the mark, the report stated.

“Had the federal government consulted epidemiologists who had a better grasp of disease transmission dynamics compared to modelers, it would have perhaps been better served,” the report said.

India is paying a heavy price both in terms of a humanitarian crisis and the spreading disease, the experts argued.

“Migrant laborers who are on their way back home now are taking the infection to other parts of the country, mostly to rural and peri-urban areas which had minimal cases and have relatively weak public health systems,” the report stated.

The experts said it seems the government was primarily advised by clinicians and academic epidemiologists with limited field training and skills.

“Policymakers apparently relied overwhelmingly on general administrative bureaucrats. The engagement with expert technocrats in the areas of epidemiology, public health, preventive medicine and social scientists was limited,” the report noted.

However, Father George Kannanthanam, deputy secretary of the Catholic Health Association of India, told UCA News that the government may not have taken the opinion of experts on the national lockdown but it did what was suitable at that given time.

“Like other countries in the world, India had little knowledge of this pandemic, but taking experts’ advice could have been better where it may have failed,” the priest said.

He added that “we are just presuming. The result could have been better or worse. The decision is already taken, so we have to collectively fight this world pandemic.”