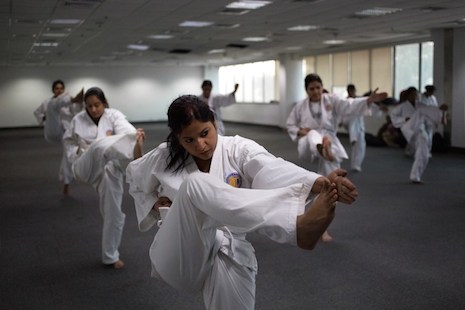 As dawn breaks over the Indian capital, a group of policewomen are already hard at work practicing their punches, on a mission to rid the city's streets of sexual predators.

Dressed in white karate kimonos, the constables knee and kick their imaginary attackers with aggression, honing their skills in preparation for their debut assignment to protect women and the vulnerable.

Following a string of high-profile attacks that has seen Delhi branded the rape capital of India, police chiefs decided to form an all-women squad specially trained in martial arts.

"We won't tolerate any bad behavior," said squad leader Bharti Wadhwa after an intense two-hour session with her 40-strong team, dubbed Charlie's Angels by their trainers.

"It can start from a simple cat call which then leads to stalking and then rape. We will nip such antics in the bud," said Wadhwa.

After months of such sessions, the women are almost ready. Wearing plain clothes instead of uniforms to blend in, they are set to be deployed in coming months at busy bus and metro stations, outside colleges and other areas where women are thought vulnerable.

Trainer Vishal Jaiswal, a blackbelt in Japanese Shotokan-style karate, is all praise for his protégés.

"In fact, I feel a great sense of responsibility while training these cops. I feel like a warrior on a mission," he said. "And my mission is to make them like Charlie's Angels, fearless and fearsome.”

Delhi, a sprawling city of some 16 million, came under the spotlight just over two years ago when thousands took to the streets, enraged about violence suffered by women.

The tipping point was the horrific fatal gang-rape of a 23-year-old student on a moving bus in the capital. The attack and the subsequent protests shook the country and led to a wave of policing and legal reforms.

Since then however, attacks on women in Delhi have showed few signs of slowing. Last month women's safety again made headlines when an Uber taxi driver was charged with raping a female passenger as she returned home from dinner in the city.

Some 2,069 rapes were registered with police in Delhi in 2014 against 1,571 the previous year, an increase of 31.6 percent. Experts say women are coming forward in increasing numbers, instead of suffering in silence, despite the stigma attached to sex crimes in deeply patriarchal India.

Police have adopted a range of controversial initiatives to try to throw off the "rape capital" tag, including holding self-defense classes for Delhi's female residents.

The all-women karate unit has been championed by Delhi police chief Bhim Sain Bassi. Known as 'Charlie Papa' on police radio, he has stressed women's safety as a priority since taking the top job in 2013.

"After some more training, the karate unit will be deployed in plain clothes near metro stations and outside schools and colleges, spots which are most vulnerable," said police deputy commissioner Varsha Sharma.

"Young girls and women must feel assured that these guardian angels are there to take care of them at all times."

Women rights activists laud the initiative but are skeptical of what a unit numbering just 40 can really achieve in a city teeming with millions.

"The message should go out loud and clear to sex offenders that they are constantly being watched wherever they may be."

In test runs, the karate unit has fanned out across the city to patrol public buses and talk to passengers about their safety fears.

Women commuters hailed the constables as "much needed" when AFP tagged along on one of their recent runs.

"I use the bus to go to college and often men stare or give you dirty looks," said Sakshi Sharma, 19, as she browsed through a pink police booklet offering tips on how to stay safe in the city.

"I used to feel helpless but I am glad to know that now women cops will be around to protect us from lecherous men. It's a great start by the police."

Sitting alongside her, Chhaya Aggarwal, a 25-year-old software professional, was more enthusiastic.

"Now our fathers and brothers need not worry about us when we are out, thanks to this women's army out on the streets." AFP