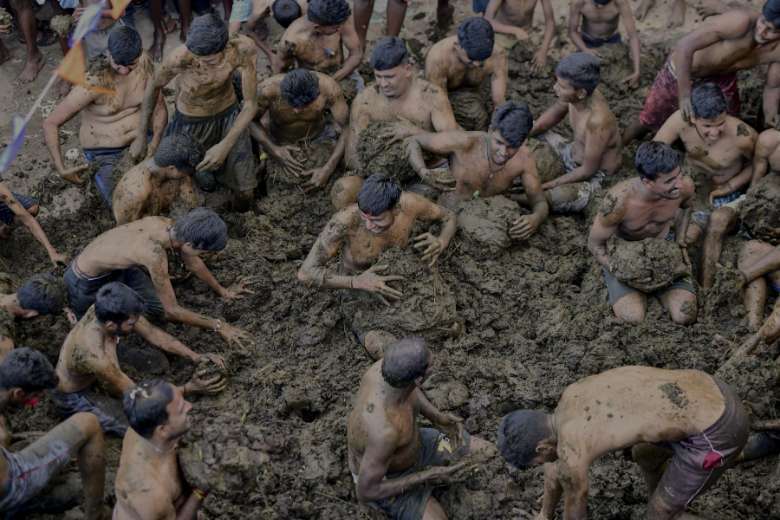 Men fling cow dung at each other during the annual Gorehabba festiva in Gumatapura village on Nov. 6. (AFP)

Joyful crowds pelted each other with fistfuls of cow manure this weekend as part of one village's local ritual to mark the end of Diwali, India's most important Hindu festival.

Similar to Spain's La Tomatina — the eccentric tomato-hurling celebration of the local fruit — residents of Gumatapura instead fling snowball-sized wads of a more earthy variety.

The Gorehabba festival begins with the afternoon collection of "ammunition" from cow-owning homes in the village, which lies on the border of the southern states of Karnataka and Tamil Nadu.

The manure is brought to the local temple on tractor trolleys, before a priest performs a blessing ritual.

After that, the dung is dumped in an open area, with men and boys wading in to prepare their weapons for the battle ahead.

People flock to Gumatapura from far-flung cities each year, and for those in attendance the messy battle is as much about fun as it is about the perceived health benefits.

"If they have a disease, it will get cured," said Mahesh, a farmer at Saturday's festival.

Some Hindus believe cows and everything they produce is sacred and purifying.

Hindu nationalist Prime Minister Narendra Modi has pushed for greater protection of the animals, and many Indian states have long banned their slaughter for meat.

Members of Modi's party have touted the use of cow urine to prevent and cure Covid-19 and other ailments. His government is also looking to encourage the production of toothpaste, shampoos and mosquito repellents from bovine waste.