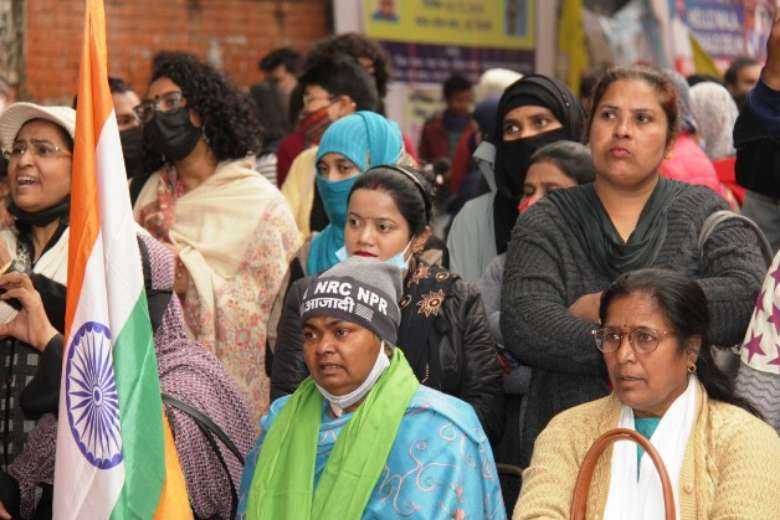 Indian rights activists and members of civil society got together in New Delhi on Dec. 16 to commemorate the second anniversary of the Shaheen Bagh protests that rocked the national capital after the Citizenship Amendment Act (CAA) was passed in 2019.

Around 500 people holding the national flag, placards and banners expressed their solidarity with the peaceful protests at Shaheen Bagh, led by women beginning on Dec. 15, 2019, and lasting until March 24, 2020, and at Jamia Millia Islamia University by students in December 2019, seen as precursors to the year-long successful farmers’ protest called off recently.

“We are here to show our solidarity with the women who took to the streets against the CAA, a draconian law intended to divide people in the name of religion, caste and creed,” Shabnam Hashmi, founder of Act Now for Harmony and Democracy, told UCA News.

Those gathered pledged to keep alive the spirit of the non-violent protests that were put down by brutal police force.

“It is a victory of ordinary women who took a stand against injustice. The CAA was meant to attack a particular community,” Hashmi said, adding that seminars, rallies and marches were also being organized by civil society in more than 20 cities across India.

A.C. Michael, a former member of the Delhi Minorities Commission, said: “I consider the Shaheen Bagh protests as a great success against this [federal] government. In fact, it was the first U-turn taken by the Narendra Modi government as despite repeated attempts they have not been able to implement the CAA in the country.”

We should not think the CAA will only affect the Muslim community. All minority communities, Dalits and tribal people will suffer if the draconian law takes effect

He was of the view that the Shaheen Bagh protests set the stage for the protests by farmers on the outskirts of Delhi that compelled the Modi government to withdraw its controversial farm laws.

Apoorvanand Jha, a professor at Delhi University, said there was a need for civil society to keep up the vigil. “We should not think the CAA will only affect the Muslim community. All minority communities, Dalits and tribal people will suffer if the draconian law takes effect.”

Rights activists praised provincial governments of Punjab and Rajasthan in the north, West Bengal in the east and Kerala in the south for deciding not to implement the CAA in their states.

The CAA seeks to amend India’s Citizenship Act, 1955, to make illegal migrants of all religions, except Muslims from Afghanistan, Bangladesh and Pakistan, eligible for Indian citizenship. It relaxes the requirement of residence in India from six to 11 years for those found eligible.

The Indian government’s logic is that most illegal migrants have fled persecution in Islamic nations. These include the Ahmedis and even Shias, along with Hindus and Sikhs from Pakistan, the Rohingya and Hindus from neighboring Myanmar and Bangladesh, besides Hindus and Christian Tamils from Sri Lanka.

Effectively, the CAA declares India as a welcome refuge to all religious communities except Muslims in violation of the constitution that ensures the fundamental right to equality for all, say activists.