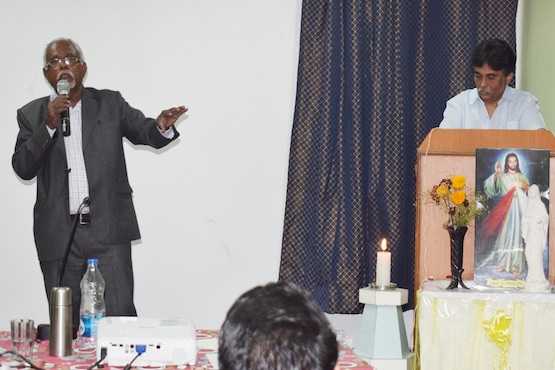 A Catholic group in India has organized a workshop to help pastors and lay leaders handle situations of Satanic influences.

Salesian Father Joseph Aymanathil, spiritual director of the group, said he had organized a similar workshop two years ago and felt "a crying need" for more such programs to help the archdiocesan clergy, especially those working in villages.

Father Aymanathil said more people, especially youngsters, are being influenced by New Age cults such as yoga, Reiki, witchcraft, Ouija boards, black magic and even Satanic worship such as black mass. "These cripple them spiritually. Such people need healing and deliverance," he said.

For the past 14 years, Father Aymanathil has been in the "deliverance ministry" of praying over such people to free them from Satanic influences.

The priest and lay leader Christopher Correya led the workshop and explained the symptoms of different levels of Satanic influences, methods to identify them and ways to face them with prayers.

Correya dealt with recognizing evil spirits, curses and blessings and the modern tendency to deny the existence of the devil.

He explained that Satanic possession can be effectively handled only by authorized people as possessions happen only in rare cases, but all lower-level Satanic influences can be cured by prayers.

Calcutta archdiocesan Father Ananda Haldar, a participant, said he often comes across cases of Satanic influences during his pastoral visits to villages. But he said he did not know how to handle them as his seminary training did not deal with such issues. He found the workshop "very helpful for his pastoral work."