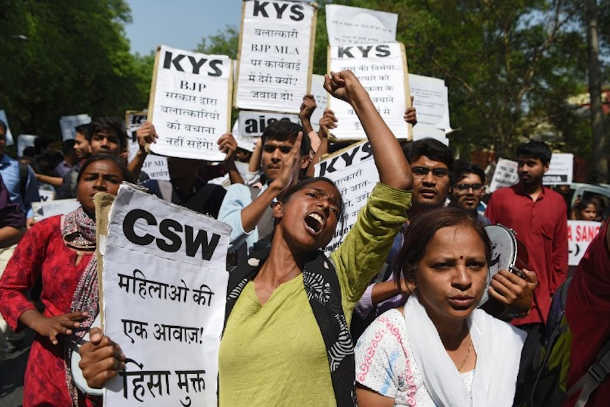 Indian women protest the political silence over the rape of a child near Jammu and a rape case in Uttar Pradesh state, in New Delhi on April 12. Federal investigators on July 11 charged a politician from Prime Minister Narendra Modi's party with raping a teenager whose plight was ignored by police until she tried to set herself alight. (Photo by Sajjad Hussain/AFP)

After a recent survey found India to be the most dangerous place in the world for women to live, rights activists are calling on the government to take action to make the country a safer place for half of the population.

The survey, released by the London-based Thomson Reuters Foundation on June 26, cited the high risk of sexual violence and slave labor that Indian women face.

Strife-torn Afghanistan and Syria were second and third, followed by Somalia and Saudi Arabia.

The foundation's 2011 survey ranked India fourth on the global index, showing how the situation has deteriorated rather than improved over the last seven years.

"Infanticide of girls is happening on a massive scale here, which effectively means a female is being killed before she's even born," said Monique Villa, who runs the foundation.

"It's ironic that in a developing nation like India, women aren't safe enough to live freely."

"This merits our immediate concern and it also belies claims that a woman is respected and well regarded in India," Fatima Sheikh, a New Delhi-based activist, told ucanews.com.

"The fact is women are still considered something of a taboo subject in our society, where even a girl's birth is seen as a bad omen for her whole family or clan."

According to figures provided by the United Nations, 27 percent of Indian women marry before the age of 18 while 29 percent suffer from sexual violence by their partner.

"The situation must be worse on the ground as 70 percent of women don't report sexual offenses," Sheikh added.

"Obsolete traditions that women fought against centuries ago are being revived by those who respect such fundamentalist values," she said.

"As a result, our social values are being undermined and we are losing our sense of decency."

Even TV commercials present women as little more than symbols or commodities rather than individuals to be respected, she added.

According to Harsh Kumar, an economist based in Uttar Pradesh, the survey ranking is likely to impact India's development and reputation on a global level.

"The government is trying to project an image of the country as a promising place for economic growth and development. But surveys like this serve to nullify these claims," Kumar told ucanews.com.

Successive governments have failed to ensure that women are safe or that perpetrators of sexual crimes against them are speedily brought to justice, if at all, said Basit Ahmad, a lawyer based in the capital.

"We don't have enough judges and there aren't any special courts to punish those who have committed crimes against women. The government has to fix this crisis and establish courts that can fast-track such cases so that women regain confidence in our justice system and step forward to report more cases of abuse."

Data from the federal government's National Crime Records Bureau shows the number of rape cases in India jumped 80 percent in the 10-year period from 2007 to 2016, when four cases of rape were reported every hour on average.

Most involved "cruelty by a husband or his relatives" (32.6 per cent) followed by "assault on women with intent to outrage her modesty" (25 percent), "kidnapping and abduction" (19 percent) and "rape" (11.5 percent).

The conviction rate for crimes against women is hovering around 18 percent, according to the same data.