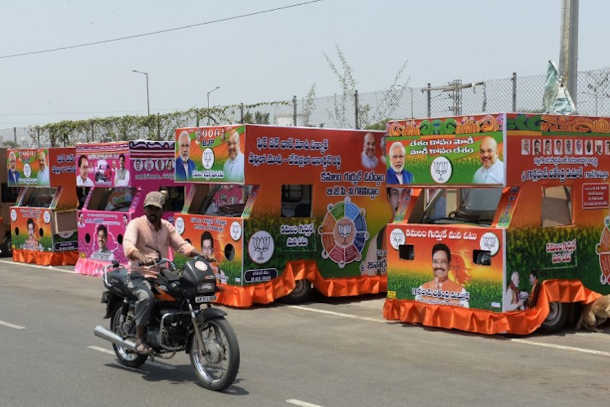 An Indian man rides a motorcycle past the election campaign vehicles of various political parties, ahead of the national elections, in Hyderabad on March 27. India is the world's biggest democracy, and its elections are also the most gruelling — with nearly six weeks between the first round of voting on April 11 and the last. (Photo by Noah Seelam/AFP)

Ahead of the general elections in India in April, Church officials have issued pastoral guidelines asking Catholics to reject candidates who espouse certain ideologies and vote for guardians of secularism and democracy.

Cardinal Oswald Gracias, president of the Catholic Bishops' Conference of India, joined other regional bishops in issuing a set of guidelines.

The latest comes from the Kerala Catholic Bishops' Council, a regional forum of bishops in southern India, favoring candidates who respect the country's secular constitution and related institutions.

It is due to be read out in all Catholic parishes in Kerala on March 31. While it offers guidance and advice, it also stresses that the Church does not favor any specific political party or ideology.

The circular, printed in the local Malayalam language, entreats parishioners to support candidates who are committed "to the values of secularism and democracy" and who will work for the "integral development and unity of the nation."

Critics say the BJP leaders plan to amend India's secular constitution to align it with Hindu nationalism and create a Hindu nation if voted into power, even though the party fielded two former Christian pastors for the state elections in November.

However, the Kerala bishops are promoting the view that India should be governed by leaders who will protect its rich heritage of religious and cultural diversity. They oppose all forms of religious fanaticism.

Cardinal Gracias in his pastoral letter asked Catholics across the country to "pray and to discern in prayer what is best for our country. We have to vote judiciously."

The Church hopes the six-week election that starts on April 11 "will give us leaders who listen to the people, understand our anxieties and their needs, and respond positively," the cardinal wrote in the letter dated March 14.

He urged voters to elect leaders who "understand authority is service," and who would work for the benefit of the economically poor, socially oppressed Dalit and tribal people while also focusing on communal harmony, national integration, and environmental conservation.

In the Christian stronghold of Goa, a former Portuguese colony north of Kerala, the Church's' Council for Social Justice and Peace issued a statement on March 26 imploring voters to reject the "terror of pseudo-nationalism."

Political and rights activists have been complaining about a growing atmosphere of intolerance after the BJP rose to power in 2014.

They claim any individual or institution that fails to conform to the BJP's ideology is branded unpatriotic.

The statement from the council's executive secretary, Father Savio Fernandes, also warned voters to avoid siding with "corrupt defectors" who move from party to party, their only concern being the pursuit of victory and power.

"People vote for them based on a party and its ideology … but they easily change their views without any consideration for voters."

His small state on India's western coast can elect two members of the 543-seat parliament. However, it must also fill three state legislative seats after two Congress party legislators quit and joined the BJP last year.

Roughly a quarter of the state's 1.4 million people are Christians, mostly Catholics.

"Another evil is the blatant engineering of defections in violation of the people's mandate. Moreover, persons who deceive and betray people's trust should have no (place) in a democracy," the statement said.

The BJP has been criticized for poaching rivals and dabbling in horse-trading to unseat Congress governments, particularly in Goa and several predominantly Christian northeastern states.

Father Fernandes said the guidelines were not devised to shape people's thinking but are meant to help Catholics make a wiser and more well informed choice when they cast their ballots.

"It's part of Church's social responsibility" to issue such pastoral letters, the priest said.