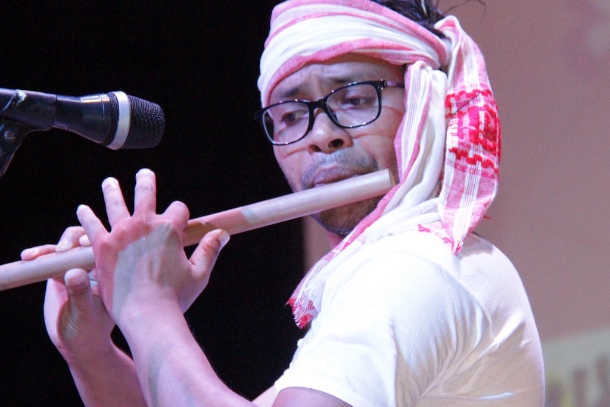 An artist plays his instrument as part of a cultural program at a gathering to mark the celebration of International Day of the World's Indigenous Peoples in New Delhi on Aug. 9. (Photo by Bijay Kumar Minj/ucanews.com)

About 2,000 people who gathered to mark International Day of the World's Indigenous Peoples were asked to fight to protect their identity and culture in the face of increasing challenges in India.

Leaders who addressed the gathering in New Delhi on Aug. 9 presented data and incidents to show how exploitation of tribal people has increased since the pro-Hindu Bharatiya Janata Party (BJP) came to power at federal level and in several states in 2014.

"Atrocities on tribals are nothing new but now tribals are branded as anti-national and the government will always harass them," Jesuit Father Vincent Ekka, a tribal rights activist, told participants.

He said the Indian constitution provided for tribal people to enjoy self-administration in certain areas "but local administrative executives are not following it and have taken an attitude of my way or the highway."

Father Ekka heads the department of tribal studies at the Jesuit-run Indian Social Institute, which organized the meeting of tribal people and leaders across India to mark the international day, which had the theme "Indigenous peoples' migration and movement."

Tribal leaders recalled how governments had made laws to take over and control tribal land and forests while chanting development mantras but acting on behalf of multinational companies and miners. Many tribal people were forced to migrate to cities.

"The main reasons for migration are mining, power projects and industries," said Lakhiram Murmu, a professor at the All India Institute of Medical Sciences.

The 2011 census showed the total number of internal migrants in India was a staggering 139 million.

Murmu, a tribal and senior surgeon, said that "when we speak about migration, it will be mostly our own people who are affected and we have to find the solution for that by creating jobs."

Tribal youth leader Ganesh Majhi saw "a conspiracy going on in the villages by giving them subsidized food grains at low prices to move them away from farming. When they don't work, farms become infertile and they will have to move out from the land."

Ashok Baxla, an earth scientist and government official, said in most cities migrant tribal people are not recognized as tribal but are recorded in a general category. "It means we lose our identity and culture," said the tribal leader.

Baxla said this would affect the tribal population in the census data and might have bad repercussions for reservation of government jobs.

India has about 104 million tribal people who form 8 percent of the population. However, 30 percent of India's 27 million Christians come from tribal communities, especially in northern and eastern states.

Christian missioners have been at the forefront of providing tribals with modern education and healthcare. But some radical Hindu groups accuse Christian services of being a facade to convert tribals to Christianity — a charge Christian leaders have consistently denied.