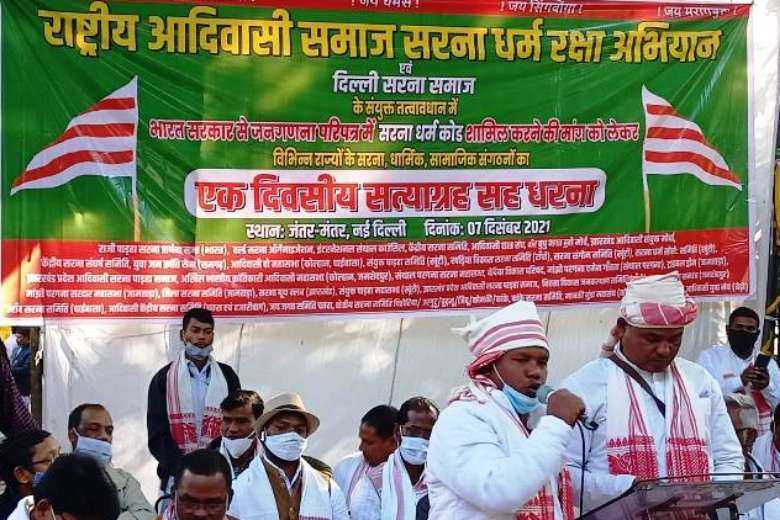 Indian tribal people, including some who are now Christians, assembled in the national capital New Delhi to press their demand for a separate Sarna religion code in the upcoming census.

The followers of the Sarna religion are predominantly of tribal origin and claim to be nature worshippers. They have been demanding recognition for it as a distinct religion in India for decades.

At present, the census has separate codes for only six religions: Hinduism, Islam, Christianity, Sikhism, Buddhism and Jainism. While filling in these columns, a tribal person has to identify as one of these or tick against the column marked as "others" but cannot specify Sarna as a distinct and different religion.

Tribal representatives from the nine states, which are tribal dominated, are now gearing up for a mass agitation to highlight their demand,

On Dec. 7, nearly 500 tribal men and women in traditional attire sat on a fast and staged a sit-in protest at Jantar Mantar in the heart of New Delhi.

They later handed over a memorandum of their demands to the offices of the president, prime minister, federal ministers for home and tribal affairs, besides the registrar general and census commissioner of India.

“States, where tribal people are in majority or have sizable numbers, have been demanding a separate Sarna code but our demand is not been taken seriously,” Karma Oraon, convener of a tribal people’s organization named Rashtriya Adivasi Samaj Sarna Dharma Raksha Abhiyan, told UCA News.

Oraon said the separate code in the national census would help tribal people to preserve their separate identity, both religious and cultural.

“Politicians in Delhi and different provinces of India have promised us to do the needful but as of now no one has taken concrete steps except the Jharkhand government,” he said.

Jharkhand state led by tribal chief minister, Hemant Soren, held a special session of its legislative assembly in November 2020 to pass a resolution demanding a separate religion code for the tribal population in the upcoming 2021 census exercise.

Mukti Prakash Tirkey, the editor of a weekly newspaper in New Delhi, said the people in predominantly tribal states of Jharkhand and Chhattisgarh have been demanding the Sarna code ever since their creation in the year 2000.

“Tribal civilization, culture and systems are completely different from mainstream religions,” he said.

The Indian constitution guarantees to protect the tribal identity and grants them recognition as a separate administrative and social category listed as scheduled tribes but has yet to accept their separate religious identity.

For the 2011 census, the National Commission for Scheduled Tribes did recommend the addition of the Sarna code. Demand for the separate religion code picked up in Jharkhand as preparations for the 2021 survey started in September.

India's national census was due to be held in February but got postponed due to the coronavirus-induced national lockdown.

Tirkey, who is a tribal Catholic leader, said: “Sarna tribals are nature worshippers. They worship forest, mountains, rivers, etc and do not belong to any established religious sect.”

Tirkey said that in the 1951 census the ninth column for religion was "tribe," which was later removed. Due to its removal, the tribal population embraced different religions, causing a major loss to the community.