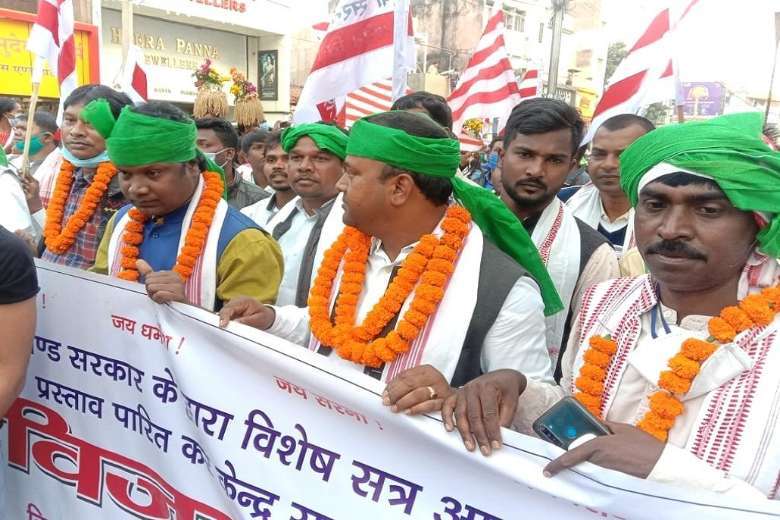 Tribal organizations in the eastern Indian state of Jharkhand have decided to intensify their demand for a separate Sarna tribal religion code in the 2021 census.

They plan to bring out 200 Sarna Dharma Sagars (chariots) in five eastern states — Jharkhand, Bihar, West Bengal, Odisha and Assam — from Dec. 20-31 to press their demand and raise awareness among people.

“We are forced to hold protests in several states as the federal government failed to fulfill our demand for a separate Sarna code in the forthcoming census,” Salkhan Murmu, president of Adivasi Sengel Abhiyan, told UCA News.

“We also plan to have a railroad blockade on Jan. 31. Our last protest in five states on Dec. 6 was a great success. The movement has been going on for the past 16 years and I hope one day the demand of millions of tribals will be fulfilled.”

A press conference in state capital Ranchi on Dec. 13 was attended by leaders from tribal groups such as the Central Sarna Committee, All India Tribal Development Council and Tribal Sengel Campaign.

“The federal government should speed up the process for according a separate religious code for Sarna tribals as 2020 is going to end in a few days,” Lalit Kachhap, general secretary of the All India Tribal Development Council, told media. “We will oppose the 2021 census if our rights are not recognized.”

Chief minister Hemant Soren’s administration passed a resolution in Jharkhand's assembly on Nov. 11 that seeks a special category for followers of the Sarna religion in the 2021 census.

“As usual, Christians across the state have supported the demand from the beginning. We were always vocal supporters of the Sarna religion and have participated in all movements related to it,” said Mukti Prakash Tirkey, editor of a weekly newspaper in New Delhi.

“Sarna tribals are nature worshippers, they do not belong to any religious sect and their demand for a separate code in the census dates back to the 1990s.”

The 1951 census contained a category for a "tribal" religion. This was removed from later censuses. Due to its removal, the tribal population embraced different religions, causing a major loss to the community. After 1951, in addition to census categories for Hindus, Muslims, Sikhs, Christians, Jains and Buddhists, there was a column titled "Others," which was removed in 2011.