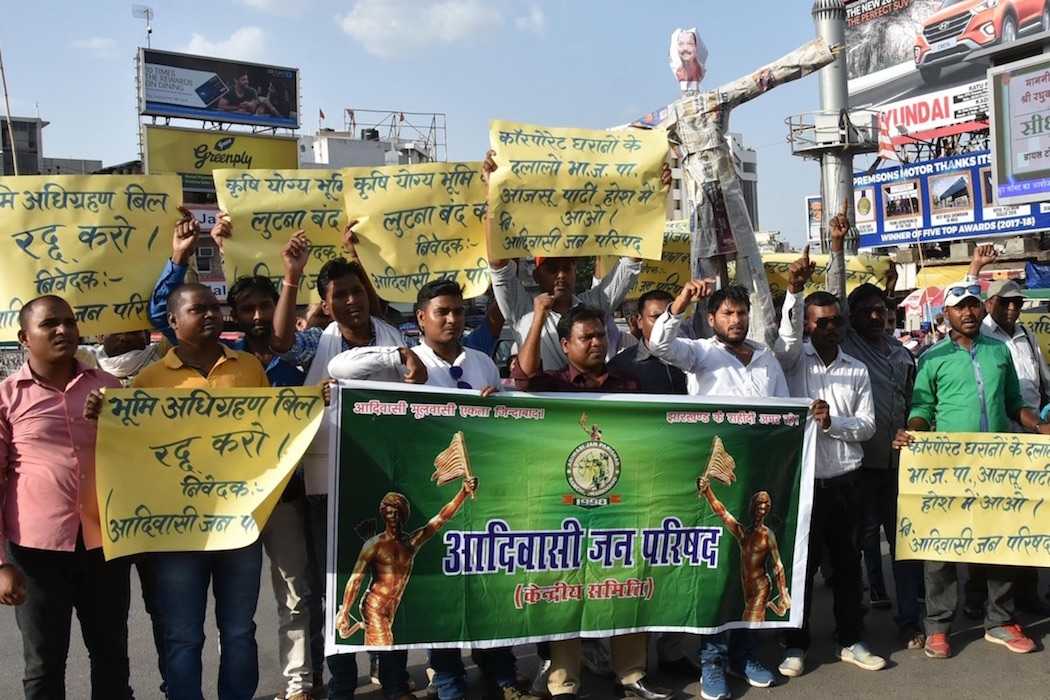 Activists of Adivasi Jan Parishad, an organization of indigenous people, march in Jharkhand capital Ranchi with the effigy of state chief minister Raghubar Das on June 17. They were protesting amendments to a law which they say takes away their land rights. (Photo from IANS)

Catholic groups have joined a chorus of opposition parties and indigenous people in India's eastern Jharkhand state to demand the withdrawal of amendments made to a law, saying the changes aim to snatch poor people's land.

Protests and sit-in-demonstrations have been held in several locations around the state following media reports that President Ram Nath Kovind had agreed to the amendments.

"The approach of the current government is more pro-rich rather than strengthening the poor," said Auxiliary Bishop Telespore Bilung of Ranchi, who like other Christian leaders, believes the move dilutes a stricter federal law.

The amendment allows the state government to alter a five-year-old federal law that aims to protect the rights of farmers and indigenous people when acquiring their land for state development purposes.

Nearly 20 opposition parties, including Congress and Jharkhand Mukti Morcha (Jharkhand Liberation Front), have demanded the state scrap the amendments and conducted a sit-in protest in front of the Ranchi residence of state governor Draupadi Murmu, the representative of the Indian president on June 25. Protesters also gathered outside district headquarters across the state.

If the government fails to scrap the move, the opposition plans to hold a state-wide shutdown on July 5.

Meanwhile the ruling pro-Hindu Bharatiya Janata Party has been conducting its own campaigns and demonstrations to garner support for the changed federal law.

The conditions include the need of an assessment on the social impact of a project for which land is taken, and permission required from the gram sabha or village council for the acquisition of agricultural or tribal land, according to social activist Father Xavier Soreng, SJ.

Both conditions, especially the village council's permission, makes it hard for the government to acquire farmland as villagers mostly oppose such moves, the Jesuit said.

In August 2017, Jharkhand legislature passed amendments to dilute these conditions to help the state acquire agricultural land especially from indigenous people for public welfare projects such as schools, hospitals, roads and areas deemed of public importance.

The state government confirmed last week that it had the president's mandatory agreement to make the amendment. However, because of mounting opposition the state has yet to publish the amendments in the State Gazette, the last step to make it a full-fledged law.

The state's latest move came after the governor in June 2017 refused to sign amendments made to two state laws. He did so following protests that claimed the changes would have allowed the government to seize tribal farmland.

"Land is the lifeline of farmers. If it is taken away, they will be like fish out of water," Bishop Bilung said.

The prelate urged the government to conduct dialogue with those who will be affected by the amendment so to reach an amicable solution as opposed "bulldozing state power on the poor and the illiterate farmers."

The bishop, himself belonging to an indigenous community, told ucanews.com that the Catholic Church will stand with the indigenous people "because they poor and uneducated."

"The government is bent on taking over the land. If the amendment is not withdrawn, the protected indigenous people's land is up for grab by anyone," he said.

Prabhakar Tirkey, the nation president of Rashtriya Isai Mahasangh, an ecumenical Christian forum said: "After the earlier attempts failed the government has taken a different route to acquire tribal land."

Indigenous people constitute 16 percent of the state's 32 million people. The state has some 1 million Christians, or 4.3 percent of the population, almost all of them tribal.

Christian percentage in the state is almost double of the 2.3 percentage Christians at national level.