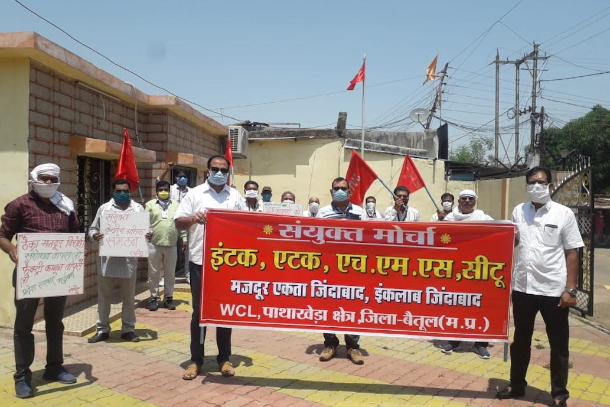 Eight labor unions, supported mostly by left-wing parties, hold a May 11 protest against the move of three Indian state governments to change laws to take away workers' rights. (Photo supplied)

Three Indian states have relaxed labor laws to reduce workers' rights, aiming to invite private investment to a sagging economy, but critics say the move will push the country backward.

Uttar Pradesh, Madhya Pradesh and Gujarat, all governed by the pro-Hindu Bharatiya Janata Party, have announced either suspension or changes to most labor laws for the next three years, purportedly to revive a sagging economy hit by the Covid-19 pandemic."Certainly, this move is not in the interest of the workers or these states," Bishop Alex Vadkaumthala, chairman of the Indian bishops' labor office, told UCA News on May 10."Unlike many Western countries, Indian society does not recognize the rights of workers, leaving them totally at the mercy of employers. The move means the death knell for workers' rights."

The state governments claim the labor reforms are needed to attract investment to India from global firms that are leaving China in the wake of the Covid-19 pandemic. The infection was first reported in the central Chinese city of Wuhan in December.

The changes to the labor laws "clearly indicate the mind" of the BJP, said Gulzar Singh Markam, a tribal leader based in Madhya Pradesh. He said the move was part of the Hindu party's agenda to establish Hindu upper-caste hegemony in the country."They call it labor reforms, but I feel it is their hidden agenda to reintroduce the age-old Hindu caste system where low-caste people — that is, the working class — never had any rights," Markam told UCA News on May 12.Most workers engaged in manual labor in India come from lower castes or outcaste groups. The now-outlawed but socially prevalent caste system considers the lower castes as servants of upper castes, having no rights.The BJP, ever since it came to power in 2014, and several northern states have been accused of trying to make India a nation of upper-caste Hindu dominance, ignoring the rights of religious minorities and people of lower castes and indigenous groups.The most populous Uttar Pradesh state of 200 million people on May 9 passed an ordinance suspending labor laws for the next three years.
Related News Muslims targeted in India over spread of Covid-19 The ordinance exempted employers from complying with all labor laws except the Building and Construction Workers Act, Bonded Labour Act, Women and Children Welfare Act and certain sections of the Workmen Compensation Act.Similarly, the central state of Madhya Pradesh and the western state of Gujarat diluted their labor laws, allowing employers not to follow safety standards related to the health, safety and working conditions of employees, among other things.It means new industrial units in Madhya Pradesh can be set up without having provisions for cleanliness, waste disposal, ventilation, lighting, drinking water, urinals, canteens, restrooms, crèches, working hours and wages during leave periods.The sweeping changes now need to get the assent of President Ram Nath Kovind to become law as many of the suspended laws are national laws passed by the Indian parliament.With the BJP leading the federal government, the president's assent remains a formality. It could encourage several other states to make similar moves, reports said."It is also a violation of fundamental rights. The right to a dignified life and equal pay are among basic tenets of democratic norms," Bishop Vadkaumthala said."It is not acceptable in a democracy like ours to leave the workers at the mercy of the employers. It will, no doubt, lead to anarchy and exploitation."

He wanted the federal government to reject the amendments and uphold workers' rights.

India has nearly 500 million workers, with 94 percent of them marginal workers in unorganized sectors, ranging from staff in wayside restaurants to people making jewelry at home.

The suspension of labor rights "will push the country back to the dark ages," said Govind Yadav, a Supreme Court lawyer and former labor union leader.He said the state governments at one stroke "put into dustbins more than two dozen labor laws" enacted in the last seven decades of independent India to protect workers from exploitation.He said the move would ultimately work against the national interest. "Multinational companies have surplus funds and advanced technology. With cheap labor government concessions, they can produce cheaper than local producers. It will gradually wipe out our small and medium industries who have to pay a high cost for production," he explained.Eight labor unions, supported by mostly left-wing parties, held a protest against the law changes on May 11. The Bharatiya Mazdoor Sangh (BMS), the union associated with the BJP, also joined the protest.In a letter to President Kovind, the union said that "workers are being treated as slaves." Taking away labor rights "is not merely a violation of the constitution but its nullification," it said.The Indian economy was already in a tailspin hurtling towards a recession even before the outbreak of the coronavirus pandemic."The government has done little to help those who lost their livelihoods," the letter said, adding that 140 million workers had lost their jobs since the Covid-19 lockdown began.
Support our Catholic journalism with a contribution of any size
Your contribution will help the Catholic journalists and editors in UCA News to report news, features, commentaries, video stories and podcasts on issues affecting the lives of millions of Catholics around the world.
Here is a gift of two valuable books as a token of appreciation to you.
Check your mailbox for links to these PDF/e-Books.