A file image of nuns waving palm fronds as they take part in a procession to commemorate Palm Sunday in Ranchi on March 20, 2016. (Photo by AFP)

Jharkhand state in eastern India has sought a federal investigation into 31 Christian charity organizations to check for the mishandling of overseas donations.

Church leaders have termed the move an attempt to slander them and church bodies in the state.

“This is nothing but an attempt to give us bad press and malign our name,” said Archbishop Felix Toppo of Ranchi.

He said they have learned from media that the government has recommended the federal home ministry to use the Central Bureau of Investigation (CBI) to probe 31 Christian non-governmental organizations, most of them Catholic.

“We have complied with all provisions of the law without fail. We have nothing to hide, the money is utilized for the purposes for which we receive them,” he told ucanews.com.

Hindu groups have accused Christian organizations of diverting foreign funds to use in efforts to convert socially poor tribal and Dalit people in the state.

The state government subsequently asked its criminal investigation department to investigate these organizations. 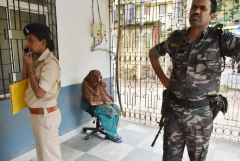 Archbishop Toppo said the local church has “supplied all the documents” to state police and cooperated with their investigations.

“We have not been officially informed about any detail of the alleged violations” but learned about further investigations only from media, he said.

Bishop Theodore Mascarenhas, secretary-general of the Catholic bishops in India, said “government machinery is being misused to wage a war against the peace-loving Christian community” in Jharkhand.

He said at least 577 non-governmental agencies are receiving foreign funds, including Hindu groups, but only 88 Christian agencies in the state are targeted.

“It is a well-orchestrated conspiracy to defame the community and hamper its developmental work among the poor and the downtrodden,” he said.

The BJP has ruled the state and the federal governments since 2014.

“The Christian missionaries are doing a good job in educating the poor tribal people, a job government should be doing,” he said. “A genuine government concerned about the welfare of people should support such activities instead of creating hurdles.”

The state has some eight million tribal people out of its 32 million people. While only some 1.5 million of them are Christians, most others follow their traditional Sarna faith. Some also follow Hinduism.