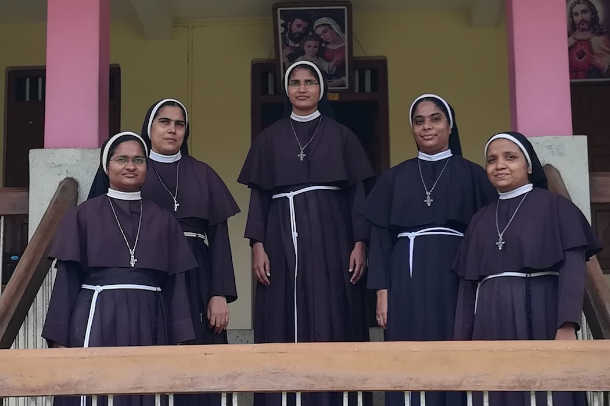 The five Missionaries of Jesus nuns who support their former superior after she accused Bishop Franco Mulakkal of raping her are seen in front of their convent in Kuravilangad town of southern Kerala. (Photo by Saji Thomas)

Activists in India have urged a state government to provide protection for a group of nuns who have publicly supported a nun who has made allegations of rape against a bishop.

Some 50 people, including social activists, writers, journalists and academics, endorsed a letter seeking protection for five Missionaries of Jesus nuns who supported a nun’s case against Bishop Franco Mulakkal of Jalandhar.

The nuns, who belong to the congregation that functions under the bishop's patronage, held a public protest in Kochi in Kerala in September calling for the 54-year-old bishop's arrest. Bishop Mulakkal was arrested on Sept. 21 but a court bailed him on Oct. 15 and he returned to Jalandhar in the northern state of Punjab.

The letter from the activists came after the congregation asked four of the nuns to return to their respective convents from where they came to Kerala in southern India to support the alleged rape victim.

“Now that the case is being pursued actively by the state, the congregation has strengthened its pressure tactics against the nuns in an obvious attempt to weaken the case by influencing and interfering in their evidence,” said the letter sent to Kerala chief minister Pinarayi Vijayan and made public on Jan. 26.

“It is apparent that the congregation is ensuring that the key witnesses are moved out of the jurisdiction of Kerala police, but at the same time accessible to Franco Mulakkal and his supporters,” added the letter initiated by Save Our Sisters, a collection of volunteer groups who support the nuns.

The fifth nun, Sister Neena Rose, was asked on Jan. 22 to report to the congregation’s headquarters in Jalandhar Diocese.

The case began when a former superior of the congregation complained to police last June that Bishop Mulakkal raped her multiple times between 2014 and 2016 when he visited her convent in Kerala.

The letter said the congregation’s current superior, who issued the orders to the nuns, remains “a strong supporter” of Bishop Mulakkal and voluntarily made a statement to the police defending him.

“In effect, the congregation authorities are liable for criminal obstruction of justice,” by ordering the nuns to leave.

According to the letter, Bishop Mulakkal “enjoys immense clout” among members of the Missionaries of Jesus as well as with priests and other nuns in Jalandhar.

Moving the five nuns out of the Kerala convent “will be disastrous and is likely to annul their evidence, and may even put their lives at risk,” the letter said.

The letter also condemned “the patent misuse of the highest offices” of the Church to defend the accused bishop and attack the nuns “who are on a mission to bring justice to the rape survivor.”

Bishop Mulakkal has consistently denied all the allegations while claiming that the accusing nun is taking revenge against him for initiating disciplinary action against her violation of her religious vows of obedience and chastity.

Days before Bishop Mulakkal was arrested, the Vatican removed him from diocesan administrative duties and appointed an administrator.

The nuns have defied the orders of their superior to return to their convents and could face canonical action, including dismissal from their congregation.

One of the nuns, Sister Kelamangalathuveliyil Anupma, told ucanews.com that they cannot follow the superior’s order because they fear for their lives.

“We are facing a serious threat to our lives which will only worsen if we move out and lose the police protection that we get now,” she said. “Besides, the relocation order aims to sabotage the case.”

The fifth nun, Sister Rose, said the order she received on Jan. 22 asked her to submit herself to her superior on Jan. 26. “It is not possible for me to reach Jalandhar at such short notice,” she said.

“They know that as well,” she said, implying that the order was served only as a step for further canonical action.

Jalandhar Diocese spokesman Father Peter Kavumpuram told ucanews.com that the diocese has nothing to do with the order from the nuns’ superior. “Those are internal matters of their congregation.”

As for the rape case, Father Kavumpuram said they expect the police to file charges by mid-February and a trial will begin shortly after.

“We are confident of winning the case as the bishop is innocent,” he said. “It’s a fake case and the enemies of the Church are campaigning to destroy the Church.”