Soren has also given the nod to close cases in connection with protests against the proposed amendments to the Chhota Nagpur Tenancy Act and Santhal Pargana Tenancy Act.

“People of Jharkhand see this decision as a big relief as many people including tribal Christians were jailed in cases registered against them and harassed in the name of the tribal movement,” Ratan Tirkey, a member of the tribal advisory committee of Jharkhand, told UCA News.

“The Pathalgadi movement was a vociferous campaign which asserted that no project or program can be implemented without the consent of the village council, but the BJP government took this movement as anti-government and many were charged with sedition.

“There were allegations by the fascist group that the Church and missionaries were involved in promoting the Pathalgadi movement. This will be cleared as the Church has always worked towards the upliftment of the poor tribal people.

“We hope that the Jharkhand government will also take action against people who falsely implicated poor tribal people and demand an investigation by the federal agency.”

The Hindi word pathalgadi means stones or plaques erected in tribal communities and villages. These contain information about the area, village council and the authority. They are also used to record genealogy, ancestry and to commemorate the dead.

The plaques had the main clauses of the Panchayats (Extension to Scheduled Areas) Act, 1996, carved on them. They also warned outsiders not to enter villages without permission.

The previous government led by Raghubar Das had crushed the movement of self-rule using brutal police power. The movement had then spread to four districts of Jharkhand in 2017. 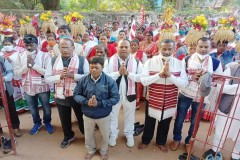 Pathalgadi practice regained prominence after the ordinances were brought in, with tribal people erecting new stones as a mark of protest. They named it a battle for jal-jangal-zameen (water, jungles and land).

However, clashes between the establishment and the local population continued and turned violent, leading to allegations that the movement was becoming more radicalized and fuelled by separatism.

In June 2018, five women members of an NGO who were in Khunti district to raise awareness about human trafficking were allegedly abducted and raped. The police blamed leaders of the Pathalgadi movement for the crime.

Meanwhile, a press release from the state government on March 26 said three-tier committees had been formed to look into the issue of withdrawal of cases registered in Saraikela-Kharsawan, Khunti and West Singhbhum. It said 23 such cases were registered with the police.

However, the number of cases does not match with data obtained by rights body Jharkhand Janadhikar Mahasabha (JJM) last year.

As per right to information (RTI) obtained by JJM, 30 cases pertaining to Pathalgadi were registered, while sedition charges were invoked in 19 of these cases. The RTI said that 16 of the 30 cases registered in Khunti, Saraikela Kharsawan and West Singhbhum have been recommended by district committees for “complete withdrawal.”

“The BJP government knew that crushing the Pathalgadi movement was the only option because if it were not checked the movement would have brought down the previous government,” said Mukti Prakash Tirkey, editor of a weekly newspaper in New Delhi.

“We demand that the state government compensate people who were victims and put behind bars through no fault of their own.”