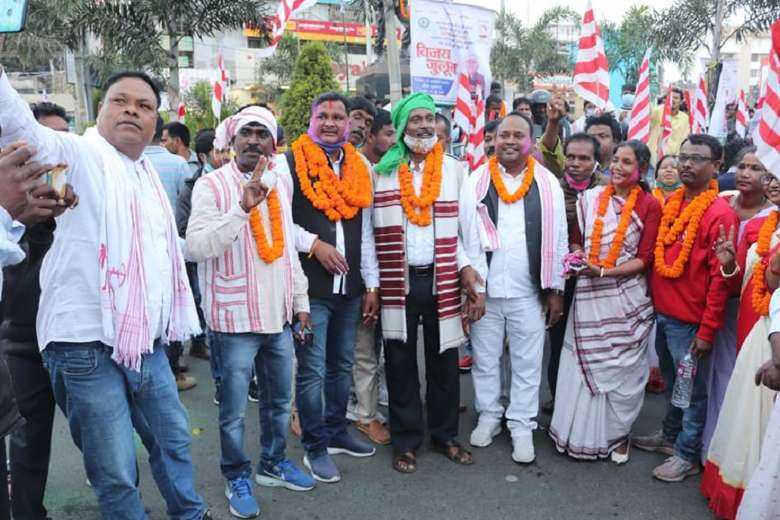 Hemant Soren, chief minister of the eastern Indian state of Jharkhand, has urged the prime minister to include a separate Sarna tribal religion code in the forthcoming census.

He reiterated the state government’s demand to Prime Minister Narendra Modi in the wake of ongoing protests by tribal groups in Jharkhand.

Speaking at a webinar meeting of government think tank NITI Aayog headed by Modi, Soren said Jharkhand is committed to the resolution that his government passed last November.

The meeting on Feb. 20 was attended by chief ministers of states and union territories in the country.

“We sent a proposal related to the demand for a separate Sarna code after we passed the resolution last year and believe that the federal government will consider it sympathetically,” Soren said.

Tribal people in the state have been demanding the Sarna code ever since the state was created in 2000.

“Tribal civilization, culture and systems are completely different. The Sarna code demand has been in existence for years to establish a place for tribal people in the census,” Soren added.

The state government convened a special assembly session and passed a resolution on Nov. 11 to send the federal government a letter recommending it recognize the Sarna religion and include a separate code for it in the 2021 census.

For many years protests and meetings have been held by tribal groups in Jharkhand and elsewhere pushing the same demand.

“It is a welcome step in the right direction because we have been demanding giving the Sarna religion a separate census column for the last three decades,” Ratan Tirkey, a member of the tribal advisory committee of the government of Jharkhand, told UCA News.

“Christians across the state have supported the demand from the beginning. They have always been vocal supporters of the Sarna religion and have participated in all the movements related to it.”

In the 1951 census, the ninth column for religion was headed "Tribal" but this was later removed. Due to its removal, the tribal population embraced different religions, causing a major loss to the community.

After 1951, in addition to Hindu, Muslim, Sikh, Christian, Jain and Buddhist, there was a column titled "Others," which was removed in 2011. The definition left out Muslims and Christians, bringing all others within the ambit of the Hindu fold.

The federal government, led by the pro-Hindu Bharatiya Janata Party and its Hindu nationalist wing Rashtriya Swayamsevak Sangh (RSS), wants tribal people to register themselves as Hindus rather than ticking the column marked "Others."

From the 1980s, due to electoral designs, the RSS has been advocating that all those living in India are Hindus.

There are 1.4 million Christians in Jharkhand out of a population of 33 million, mostly tribal people.