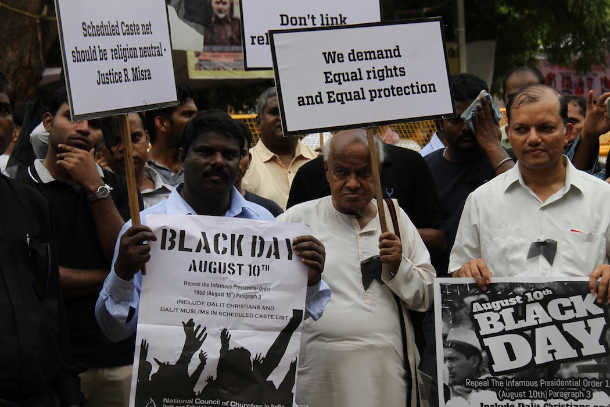 The legislative house of the southern state passed the resolution on Feb. 7 appealing to the federal government to make amendments to regulations to allow Christians from Dalit communities to enjoy benefits meant for the advancement of socially disadvantaged people.

The resolution proposed by chief minister Nara Chandrababu Naidu said that if Dalit people convert to Christianity it does not change their social and economic status.

“We appreciate the move. Naidu understood the plight of the poor Christians but that does not mean we achieved our target. There is still long way to go,” Father Devasagaya Raj, secretary of the Indian bishops’ office for Dalits, told ucanews.com.

The Andhra Pradesh Federation of Churches (APFC), an ecumenical organization of heads of different churches, welcomed the resolution on behalf of the Christian community.

The APFC said it appreciated Naidu’s “consistent stand on this issue” that Dalit Christians should be treated on a par with Dalits who had adopted Sikhism and Buddhism.

The Christians’ struggle began in 1950 when a presidential order said only Dalit people following Hinduism could enjoy constitution-guaranteed concessions and seat reservations meant for the socioeconomic advancement of Dalit people.

The order effectively cut off benefits to Dalit people who converted to other religions. It was amended twice to include Dalits among Sikhs in 1956 and Buddhists in 1990.

Christians of Dalit origin are estimated to be make up 33 percent of India’s 28 million Christians.

The move by Andhra Pradesh “is certainly a victory” considering that only four other states — Bihar, Telangana, Uttar Pradesh and Pondicherry — have so far passed such resolutions recommending benefits for Christians of Dalit origin, Father Raj said.

“This will surely impact other states to think over the issue,” he added.

The priest said successive governments have refused to include Dalit Christians and Muslims for the benefits because their religions do not follow the caste system.

It will also help India’s Supreme Court to expedite a case which has been pending before it for the past 15 years, Manoharan said.

Dalit activist Thomas Franklin Caesar, a Supreme Court lawyer, called it “just a small victory but it can go a long way.”

Naidu’s move can put pressure on the other states as well as other political leaders ahead of the general election due in two months, he said.

“Actually, the Dalit Christians are not begging for social benefits. It’s their right and giving it to them is not a favor granted to them,” Caesar said.