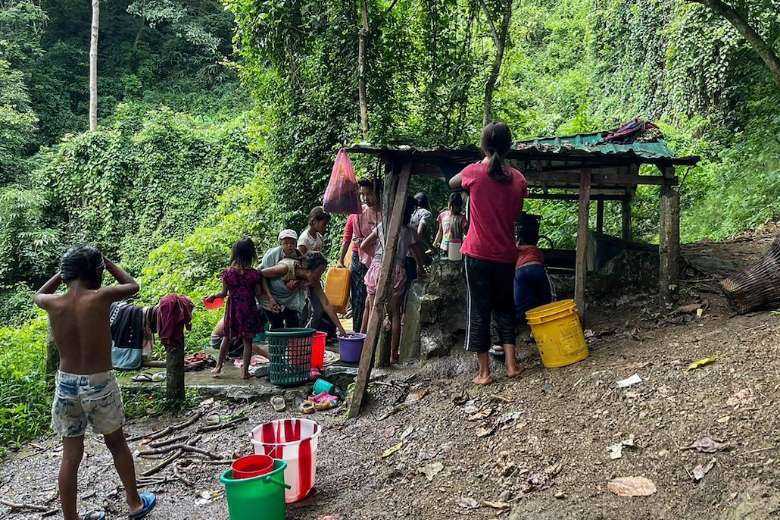 Refugees collect water at Pang village in India's eastern state of Mizoram on Sept. 24, 2021, after people fled across the border following attacks by Myanmar's military on villages in Chin state. (Photo: AFP)

Some 8,000 people, mostly Christians who fled the ongoing violence in Myanmar and crossed over to the neighboring Indian state of Mizoram, have been given cards identifying them as residents of the state but without the privileges of citizenship.

Authorities in Champhai district completed the profiling of 8,279 Myanmar refugees by the end of February. An estimated 10,000 people fleeing violence-hit Myanmar have sought shelter in the district, according to government figures.

About 30,000 Myanmar people including many children have taken shelter in Christian-majority Mizoram since February 2021 when in the Myanmar military launched a coup that deposed the elected government.

Sources in the Mizoram Home Department in state capital Aizawl said the state's 11 districts have been asked to issue identity cards to Myanmar nationals living in Indian territory.

"The exercise is to help provide relief materials. The identity cards will actually segregate them from the natives. The foreigners will not get other citizenship rights like voting, but they can avail themselves of health facilities and their children can study in specially arranged makeshift schools," an official said.

Mizoram Chief Minister Zoramthanga told the legislative house last week that 24,289 Myanmar citizens have taken shelter in Mizoram. However, unofficial reports said the number could be more than 30,000.

Most people who crossed over to Mizoram are Christians and have ethnic affinities with some tribes in Mizoram.

Church leaders recently said the newborn babies of recent arrivals will be treated as Christians for all practical purposes but cannot get any document issued for their baptism.

More people are expected to cross over to India amid increased armed clashes between the Myanmar army and the Chinland Defence Force and Chin National Army.

Zoramthanga said the federal government has not officially recognized the Myanmar citizens in India as refugees and no extra funds have been provided for their relief and rehabilitation.

However, some special assistance packages have been arranged by both the state and central governments to help the recent arrivals.

Meanwhile, 29 students who fled Myanmar appeared for the examination of grades 10 and 12 conducted by the Mizoram Board of School Education, sources said.

First doses of Covid-19 vaccines have also been administered to over 1,500 Myanmar people.

We believe that the rule of law should prevail. We stand for the restoration of democracy in Myanmar

A letter issued by the Home Ministry reiterated that state governments have no authority to grant refugee status to any foreigner and India is not a signatory of the UN Refugee Convention of 1951 and its 1967 Protocol.

India is doing a tightrope walk as it needs the cooperation of the Myanmar junta to fight various insurgent groups run by Naga and other tribal communities from Myanmar. India has condemned any use of violence in Myanmar.

"We believe that the rule of law should prevail. We stand for the restoration of democracy in Myanmar,” Ministry of External Affairs spokesman Arindam Bagchi said last year.

Foreign Secretary Harsh Vardhan Shringla visited Myanmar in December 2021 and provided Covid vaccines and other assistance to the military regime.