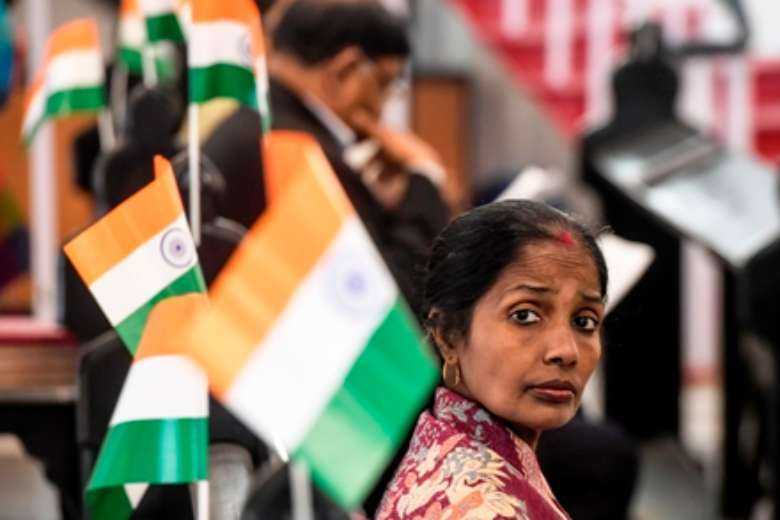 A woman looks on as she participates with Christians in a special 'Prayer for our Country' organized to celebrate India's Republic Day at the Union Chapel in Kolkata on Jan. 26, 2020. (Photo: AFP)

The Haryana Prevention of Unlawful Conversion of Religion Bill, 2022, was adopted in the state legislative assembly amid protests and a walkout by Congress, the main opposition party, on March 22.

The bill preventing religious conversions and interfaith marriages “through force, undue influence or allurement” has a provision of imprisonment of one to five years and a fine of not less than 100,000 rupees (US$1,310) for the guilty persons.

“There is no second opinion that the bill was passed to check the activities of so-called minority religions or groups in the state. The bill was uncalled for as there was a similar law in the state [preventing conversions],” said Father Felix Jones, who heads Delhi Archdiocese's Commission for Ecumenism and Interfaith Dialogue.

Divine Word Father Jones told UCA News that “the bill will send a wrong message among minorities as there are possibilities of its misuse. People can use the law as a tool to settle their personal scores.”

The priest pointed out the already existing differences among Hindus and Muslims in the state on the issue of Friday prayers in Gurugram city. Hindu groups in the recent past stopped Muslims from praying at public places while the Church tried to pacify the issue.

“Such contentious issues are a matter of great concern for all of us and we are planning to have an ecumenical meet of all religions hoping to address them collectively,” Father Jones said.

A.C. Michael, convener of the United Christian Forum, told UCA News that “there was no proper study to indicate the need for such laws although one after the other every state was bringing them in.”

Michael, a former member of Delhi Minorities Commission, said that “none of these state governments have produced any believable data to establish that forced religious conversions were indeed taking place within their jurisdiction.”

The Catholic lay leader sought to remind that his organization along with others including Archbishop Peter Machado of Bangalore had challenged the constitutional validity of such laws that went against the individual’s choice of faith in the Supreme Court. “Hopefully, it will come up for hearing soon,” he said.

The new Haryana bill, besides banning forcible religious conversions, provides for declaring null and void those marriages done solely for the purpose of conversion from one religion to another religion.

If religion is concealed with an intention to marry, then the person shall be punished with imprisonment of three years to 10 years and shall also be liable to pay a fine of not less than 300,000 rupees.