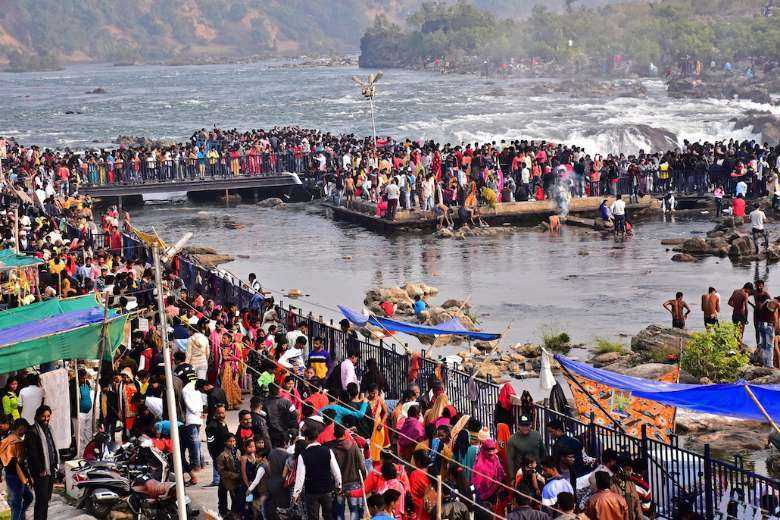 Visitors crowd on the first day of the new year around Marble Rocks Waterfall on the Narmada River in Bhedaghat in Madhya Pradesh state on Jan. 1. The central Indian state has introduced a tough anti-conversion law. (Photo: AFP)

Madhya Pradesh state in central India has replaced its more than 50-year-old anti-conversion law with a new and more stringent one that can criminalize even conversion for marriage.

The law notified on Jan. 9 says any attempt to convert a person from one religion to another through misrepresentation, allurement, use of threat or force, undue influence, coercion or by marriage is a punishable offense.

Violators can be jailed for up to 10 years under the new law called the Madhya Pradesh Freedom of Religion Ordinance 2020. Those abetting or conspiring such conversions can also be punished.

The new law replaces the Madhya Pradesh Freedom of Religion act of 1968. However, it allows the reconversion of a person to one's parental religion without violating the law's provision.

Leaders of the state government-run by the pro-Hindu Bharatiya Janata Party (BJP) hold that Hinduism is the parental religion of religious minorities in the country such as Christians and Muslims.

In effect, the law allows Hindu groups to convert Christians and Muslims to Hinduism. But those Hindus who convert to Islam or Christianity for marriage can be punished along with their spouses, who can be accused of abetting and conspiring the conversion.

"This law is one-sided and against fundamental rights guaranteed in the Indian constitution," said Father Maria Stephan, public relations officer of the Catholic Church in Madhya Pradesh.

The law says "any gift, gratification, easy money or material benefit either in cash or kind, employment, free education in a reputed school run by any religious body or better lifestyle, divine pleasure or otherwise," will be considered allurement for conversion.

Psychological pressure and physical force amount to coercion and force include a threat, including divine displeasure, social excommunication or injury to the converted person or to his or her relatives.

The law stipulates a maximum 10-year jail term and a fine of 50,000 rupees (US$715) for those converting a minor or a woman belonging to socially poor Dalit or tribal communities.

"The new law is definitely a matter of great concern for the minorities," Father Stephan told UCA News on Jan. 11.

"Now, if a minority school offers free education or employment to a needy person, the officials of the school can be booked for attempting convert.

"The law appears to give unbridled power to the right-wing Hindu activists who often attack Christians on charges of conversion."

The priest noted that, based on mere allegations of allurement or force, a person could be booked and taken to court.

Madhya Pradesh is among several Indian states where Christians are persecuted for alleged religious conversion.

The government originally proposed the law for checking alleged "love jihad," which accuses Muslim men of feigning love to marry girls from other religions and converting them to Islam.

Uttar Pradesh, which is also ruled by the BJP, promulgated an ordinance last November to check love jihad.

Other BJP-ruled states such as Karnataka, Haryana, and Assam have also announced plans to introduce similar laws.

Meanwhile, the Supreme Court of India, the country's top court, on Jan. 6 agreed to hear a petition challenging the Uttar Pradesh Prohibition of Unlawful Conversion of Religion Ordinance, 2020, and the Uttarakhand Freedom of Religion Act, 2018.

These laws were promulgated even after the federal government last February told parliament that no case of love jihad had been reported by any of the federal agencies.