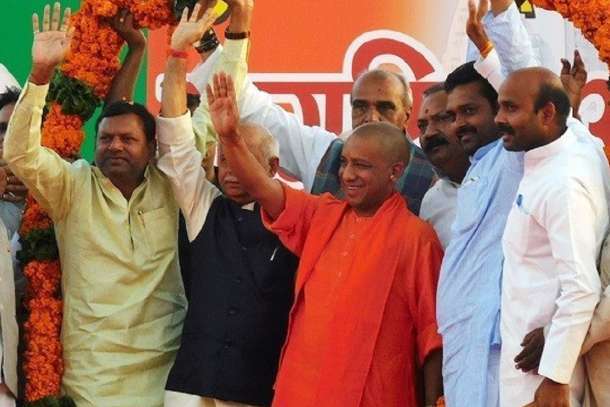 Uttar Pradesh chief minister Yogi Adityanath (center) waves to supporters as he arrives to address a gathering in his home constituency of Gorakhpur on March 25. (Photo: UCA News/IANS)

The ordinance approved on Nov. 24 by chief minister Yogi Adityanath and his cabinet stipulates a jail term of up to 10 years for those found guilty.

"Any law that hinders my fundamental right to life guaranteed under the constitution of India cannot be accepted. It is my personal choice to practice any faith I want. No one can take away this constitutional right from me,” A.C. Michael, national coordinator of the United Christian Forum, told UCA News.

“The government has no right to infringe upon my rights. This law should be challenged and I am sure it will not stand good scrutiny by the law courts in India.”

Under the ordinance, called the Prohibition of Unlawful Religious Conversion, a marriage will be declared invalid if it is found that it was for the purpose of changing a woman’s religion.

“It was needed to check the law and order situation in the state to give justice for women, especially women from scheduled castes and scheduled tribes (SC/ST) background,” state spokesperson Sidharth Nath Singh said.

“More than 100 forcible conversions have been recorded in the state over the past several months using deceit, force and dishonesty, hence it was necessary to have this law.”

In the case of mass conversion by force or allurement, the jail term will range from three to 10 years, with a minimum fine of 50,000 rupees.

Under the new law, couples belonging to different religions will have to give two months’ notice to the district magistrate before the ceremony and they can get married after receiving approval. Other states ruled by the Bharatiya Janata Party (BJP), such as Assam, Haryana, Madhya Pradesh and Karnataka, are mulling similar laws.

Gharwapsi, a reconversion drive carried out by right-wing Hindu groups, has gained momentum since the BJP-led government came to power in May 2014.

Hindu nationalists have accused Christians of using force and surreptitious tactics in pursuing conversions, often storming into villages and leading reconversion ceremonies in which Christians are compelled to perform Hindu rituals.

“We have to wait until it becomes law because two to three days before Allahabad High Court said choosing a religion is a fundamental right,” Muhammad Arif, chairman of the Center for Harmony and Peace, told UCA News.

“According to law, we are free to embrace any religion but what about forced conversion and gharwapsi? There should be some mechanism so that this ill practice should be checked. The proposed law seems to target only people belonging to poor and minority groups,” the Muslim leader said.