An artist dressed as Lord Ram from the Hindu epic, Ramayana, gestures during a festival in Bangalore, India, on Dec. 20, 2018. (Photo: AFP)

The introduction of Hindu epics Ramayana and Mahabharata in the academic curriculum for graduate studies by the central Indian state of Madhya Pradesh has drawn flak for going against the secular character of the country.

Madhya Pradesh Higher Education Minister Mohan Yadav said on Sept. 13 that the government has decided to introduce topics from the popular epics in the academic curriculum for graduate students of all streams for the 2021-22 academic year.

He said the decision taken on the recommendation of the state’s syllabus committee was part of an effort to integrate Indian cultural principles in higher education.

“Whoever wants to learn about Lord Ram’s character and contemporary works can do so in these courses. If we can bring our glorious history forward, no one should have any issue with it,” Yadav added.

Madhya Pradesh is ruled by the pro-Hindu Bharatiya Janata Party (BJP), which has long wanted to push its Hindu nationalist agenda under the guise of reforming the education policy across the country.

“There is no harm in introducing epics of Hindu religion as part of the academic curriculum where students get to know about our traditions and cultures and help them get in touch with them,” Father Babu Joseph, former spokesperson of the Catholic Bishops Conference of India (CBCI), told UCA News.

However, he sought to remind the state government that India was a country with composite culture having assimilated philosophies of different religions, cultures and traditions. “Promoting or given predominance to one particular religion over other religions does not appear to be in tune with the secular principles of our nation,” he felt.

“The epics or other religious scriptures are all part of humanity and do not belong to one particular religion,” he added. “We need to co-exist and grow together.”

Muslim scholar Maulana Umar Quasmi said the government’s decision was “an attempt to saffronize or Hinduize" the secular education system in the state. “The government is only promoting one religion and this is against the secular credentials of the country, which is bound to create misunderstandings among other religions,” he told UCA News.

Arif Masood, a legislator of the opposition Congress party said the government’s decision was an attempt to hide its failures on issues like education, employment and infrastructure development. The BJP had promised development for all but had miserably failed the people of the country. 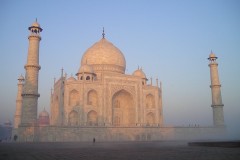 Critics fear the attempt is to turn India toward an imagined past of Hindu glory by promoting only the majority religion.

UR RAJ
What is wrong if the Hindu epics are added to college syllabus? After all, India has been a Hindu nation for thousands of years, and reading the these epics should be made mandatory for each Indian irrespective of their religious beliefs. These are "epics" and NOT Bible or Koran, and no way counters the Christian or Islamic beliefs. These epics occurred thousands of years before the advent of these Abrahamic belief system. Why are you people so annoyed? Should Indians read about Jesus and Mohammed instead of Ram and Shri Krishna? How illogical.
Reply