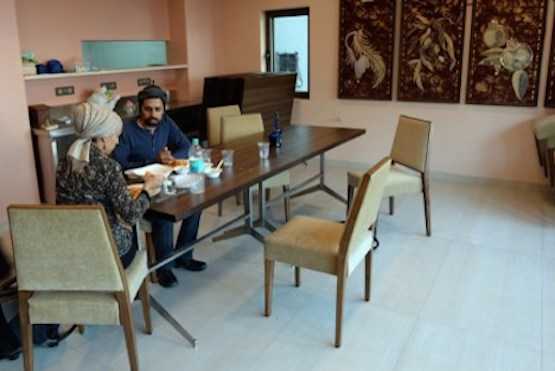 Jewish tourists eat a kosher meal at the Chabad Lubavitch House, which was extensively damaged in the Mumbai terrorist attacks in 2008 in this 2014 file photo. (Photo by AFP)

Jewish leaders welcomed the June 21 announcement, saying it was long overdue for the community.

India has some some 4,650 Jewish people with more than half of them living in Maharashtra

"We think it is a step, which the local [Jewish] community can gain a lot from," said Nimrod Assouline, Deputy Chief of Mission, Consulate-General of Israel, in Mumbai.

"Although, we still don't know all the benefits of becoming a minority. These benefits are yet to be discussed with the authorities, but we are proud," said Rabbi Kozlovsky, who co-directs Chabad Lubavitch House of Mumbai along with his wife Chaya Kozlovsky.

The Chabad Lubavitch House is a Jewish community center that was targeted by Muslim extremists in the November 2008 terror attacks in Mumbai.

The Rabbi said Jewish people have been living in India for more than 2,000 years and that "it was time for us to be recognized as a minority."

Recorded history shows one of the earliest Jewish settlements was in Kerala before the time of Jesus, while some historians believe trading ties with go back to the time of Judea's King Solomon.

India had some 40,000 Jewish people when it became independent in 1947, living in scattered pockets in cities like Kochi, Kolkata, Chennai and Mumbai.

Hundreds have since migrated to Israel and elsewhere because of socio-political changes over the years.

Mumbai, the commercial capital of India, continues to be host to the largest active Jewish population in India, and has at least eight synagogues and communities in different parts of the city.

Rabbi Kozlovsky said the new status would help "conserve the uniqueness of our religion and benefit the community, especially in terms of education."

The new status entitles them to a reserved quota of places in universities and for school scholarships as well as similar schemes and multi-sectored development programs.

Minorities are also allowed to establish and manage educational institutions with a view to helping their people with state funding.

The new status also makes Jewish people eligible for certain concessions as the Indian constitution has provisions to protect and help "linguistic and religious" minorities who are numerically less in population.