Some suspect the issue has been blown out of proportion to divide Muslims and Sikhs, prominent religious minorities 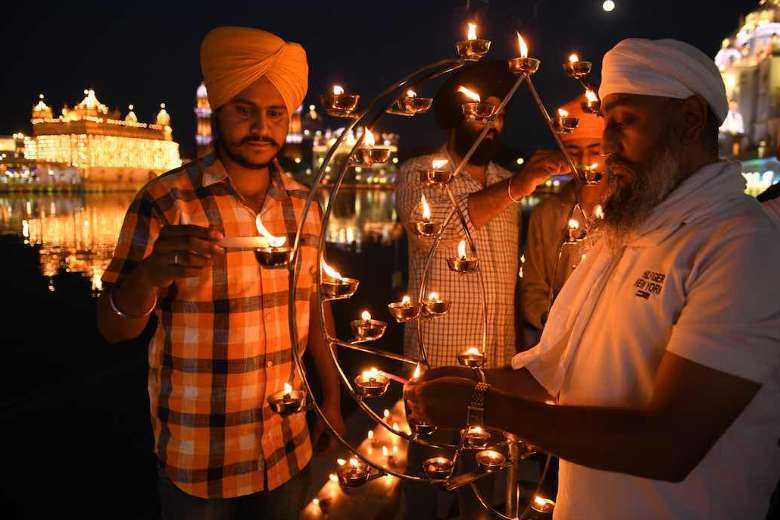 Sikh men light candles on the birth anniversary of Guru Amar Das Ji, the third guru of the Sikhs, at the Golden Temple in Amritsar on May 25. (Photo: Narinder Nanu/AFP)

Sikh religious leaders in India have demanded an anti-conversion law in the Muslim-majority Jammu and Kashmir region after two Sikh women were kidnapped, converted and married to Muslim men.

The Sikhs, including their influential religious body Akal Takht, called for an anti-conversion law after officials confirmed on June 27 that two Sikh women in Srinagar town were abducted and forcibly converted to Islam. One of them was converted at gunpoint and both were forced to marry their abductors, local reports said."There is an interfaith marriage law in Uttar Pradesh and Madhya Pradesh against forceful religious conversion. We want the same law to be implemented in Jammu and Kashmir for the safety of Sikh minority girls," Akal Takht chief Giani Harpreet Singh said in his letter to Lieutenant Governor Manoj Sinha.Seven Indian states, mostly ruled by the pro-Hindu Bharatiya Janata Party (BJP), have laws that restrict religious conversions. These laws make it a criminal offense to force anyone to change religion.Sikh leaders said the community was agitated over the forcible marriages of Sikh girls.

Local reports said one 18-year-old woman was married to a 60-year-old man. The other was above 20 but both were forced to marry much older men.

"There is outrage among the Sikh community worldwide about such repeated incidents,” said the Sikh leader's letter to Sinha, who runs the federally administered Jammu and Kashmir territory.

Sikh leaders alleged that at least four Sikhs have been kidnapped and forcefully converted in the region in the last month.

Manjinder Singh Sirsa, president of the Delhi Sikh Gurdwara Management Committee, led a delegation to see Sinha, who assured them of action for the safe return of the girls.Shiromani Gurdwara Prabandhak Committee (SGPC), the powerful Sikh body based in Sikh-majority Punjab state, promised support for the girls' families.President Bibi Jagir Kaur advocated that "people in the country" should stick to the religion they are born in.

Jammu and Kashmir, which previously enjoyed special constitutional rights, has been under the federal rule of Prime Minister Narendra Modi since Aug. 5, 2019, when the region’s autonomy was withdrawn.

Some Muslim politicians including the region’s former chief minister Omar Abdullah said the latest case has been blown out of proportion for political gain.

Sikhs have been supporting Muslims in their political struggles to oppose BJP policies that aim to make India a Hindu nation, ignoring the rights of religious minorities.

Dividing the religious minorities is part of a BJP game, some observers say.

Abdullah said any move to drive a wedge between Sikhs and Muslims in Kashmir will cause "irreparable harm" to the region.

“The authorities should move quickly to investigate the recent cause of tension and, if anyone has broken the law, they should be prosecuted and necessary punishment handed out," he said.

Abdullah tweeted: "The two communities [Muslim and Sikh] have supported each other through thick and thin, having withstood countless attempts to damage age-old relationships.”