'I never imagined a priest would be washing my feet,' says Sikh leader Satnaam Singh of his Maundy Thursday experience 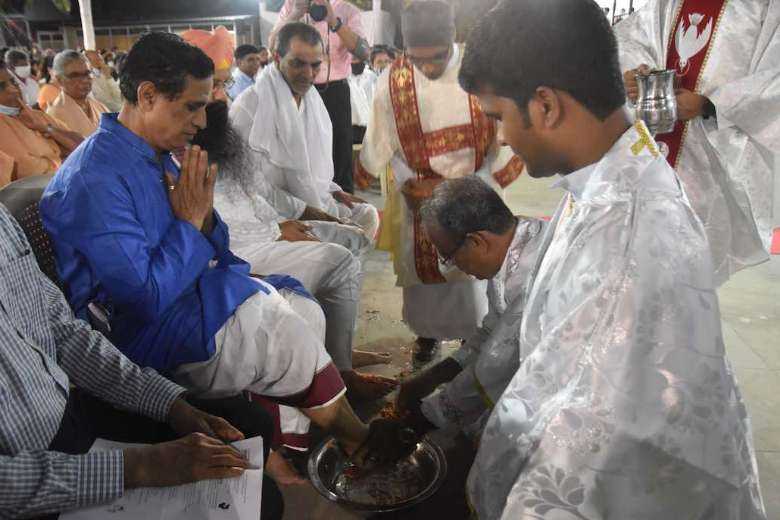 Imran Shaikh cannot describe in words what he experienced when a Catholic priest washed his feet on Maundy Thursday at St. Vincent Pallotti Church in India’s financial hub Mumbai.

“I was literally in tears and wanted to tell him not to do it as he is a spiritual person,” said the 45-year-old Muslim social worker. “But I did not do so because I felt it would offend him.”

Shaikh was among 12 persons from the Muslim, Hindu and Sikh communities who were specially invited to participate in the traditional feet-washing ceremony commemorating the Last Supper of Jesus with his disciples at the church on April 14.

Recalling his experience, Shaikh told UCA News on April 18 that it was not an ordinary human activity. “I believe it was an act by an angel. No human being can reduce himself so much that he washes the feet of others. It is unimaginable for me,” he added.

He said he had learned how “we need to shed our egos and become selfless to serve others … especially at a time when religious intolerance and hatred is on the rise in the country.”

Parish priest Father Reginaldo Antonio Mascarenhas called it “a humble attempt to share the love of Christ that transcends all barriers such as caste, creed, linguistic and religious differences. “We Christians believe in selfless love and service to humanity,” he told UCA News.

“This humbling experience has taught me a lesson to spread our wings to help others, treating them all as children of one God”

“I never imagined a priest would be washing my feet when I was invited to be part of the function,” said Satnaam Singh, vice-president of a Sikh gurdwara.

The 56-year-old Sikh leader told UCA News that he now understood the importance of treating everyone as equal while shedding religious differences or biases.

Shyam Auti, a 61-year-old temple priest, too was much impressed. “We need to understand that everyone is a son or daughter of the same God. No religion teaches hatred against each other. Everyone is the same,” he added.

The gesture of welcoming religious leaders was welcomed by parishioners as well.

“We are people of God and communion with God is communion with our fellow beings,” said deacon Ivan Fernandez, who attended the special Maundy Thursday function.

The 47-year-old Fernandez told UCA News that it was the first time he was witnessing a priest washing the feet of people from different religions.

“This humbling experience has taught me a lesson to spread our wings to help others, treating them all as children of one God,” he added.

10 Comments on this Story

BR EDWARD
Well done we are children of the same God.
Reply

JOAQUIM CARDOZ
It's an apt act specially to portrait all Gods are one and humanity should prevail.
Reply

SHYAMRAO
It was first time in Marol village histries and brotherhood message????????
Reply

AUGUSTINE FERNANDES
Salute the priest for this wonderful gesture ???? ????
Reply

PHILOMENA
Such a meaningful celebration on Maundy Thursday. A benchmark for all of us across all religions to be united in brotherhood and do away with hatred.
Reply

STEVEN JOHN CASTELINO
It is a great initiative taken by our parish priest Fr. Reginald and a good sign of brotherhood display by this act.
Reply

YVONNE PUSHPARAJ
Such a beautiful & humbling experience, sharing this gesture which demonstrates the love of Christ, made even more special in extending it to people of other religions!
Reply