As intolerance and sectarian violence rise across the country, conclave resolves to spread true teachings of various faiths 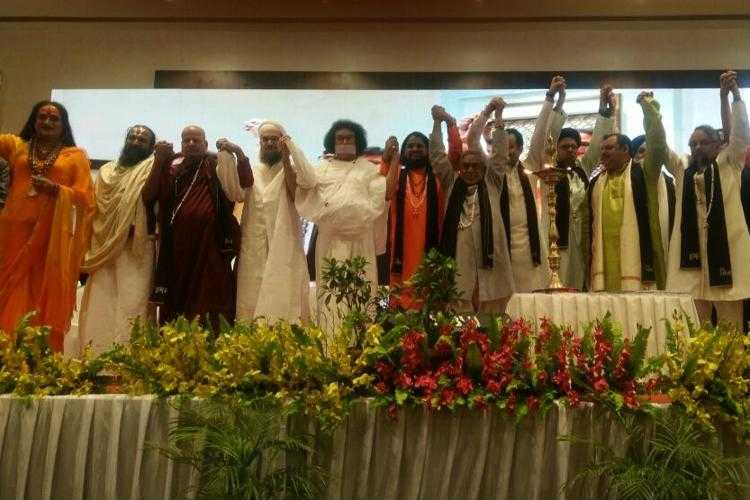 Leaders from the Hindu, Muslim, Christian, Sikh, Jain and Buddhist religions hold hands after their resolution to promote religious harmony at the conclave in Indore. (Photo supplied)

More than 1,500 religious leaders in India concluded a two-day conclave resolving to reach out to the masses with true teachings of their faiths to check increasing religion-based hatred and violence.

Representatives of various sects of the Hindu, Muslim, Christian, Sikh, Jain and Buddhist religions and sexual minorities attended the event on April 11-12 in Indore. It was jointly organized by three organizations working for religious harmony.

"We see a rise in sectarian violence in the country and have yet to find a solution. Those spreading violence are not religious people. They do not understand the tenets of their religion," said Adil Sayeed, one of the organizers.

He said people spread hate about religions for political reasons and personal profit. "These people pick up teachings and traditions that suit them to spread hatred, and simple ordinary people fall for such distorted teachings. This leads to religious intolerance," he said.

Sayeed said participants unanimously agreed to teach their followers the authentic spirit of their religions as no religion advocates hate and violence as the path of spiritual progress.

India has been witnessing increased religious polarization since the pro-Hindu Bharatiya Janata Party (BJP) came to power in 2014. It projected itself as the champion of Hindus, bolstering Hindu groups to accelerate their action to turn India into a Hindu-only nation.

Religious minorities like Christians and Muslims have been complaining of increased violence against their people. At least 10 Muslim men have been lynched and many injured by vigilante cow protection groups, many of which seemed to operate with the support of the BJP, rights group Amnesty India said in a report early this year.

Christians were often attacked after being accused of converting Hindus. The issue was addressed in the conclave by Reverend Jacob Corepiscopa, a priest of the Kerala-based Jacobite Syrian Orthodox Church who now works in central India.

Some 80 percent of India's 1.3 billion people are Hindus but Muslims number some 14 percent or 180 million, making them the largest religious minority. Although Christians comprise just 2.3 percent, they are the third-largest minority.

As the country braces for its next parliamentary election in the first quarter of 2019, political parties have begun to project themselves as protectors of religious and caste interests in their effort to garner votes.

Hindu ascetic Sadhvi Pragya Bharati said Hinduism has "special love and respect for women" and "space to include everyone."

"We name our rivers after women, the goddess of wisdom is named after a woman and even the great war depicted in the epic Mahabharata was for protecting the dignity of a woman," she said without mentioning the recent rape and murder of an eight-year-old Muslim girl by Hindus in Jammu in an alleged revenge attack against Muslims.

Muslim leader Sayyid Ali Muhammad Naqvi said religious leaders who should be speaking against hatred are sometimes hypocritical by failing to condemn violence perpetuated in the name of their religion.

Transgender representative Mahamandleshwar Laxminarayan Tripathy said religions have exploited people with their male domination. "Those acting as leaders are trying to impose religion on others as they perceive it rather than imbibing its real spirit. This misrepresentation leads to chaos," she said.