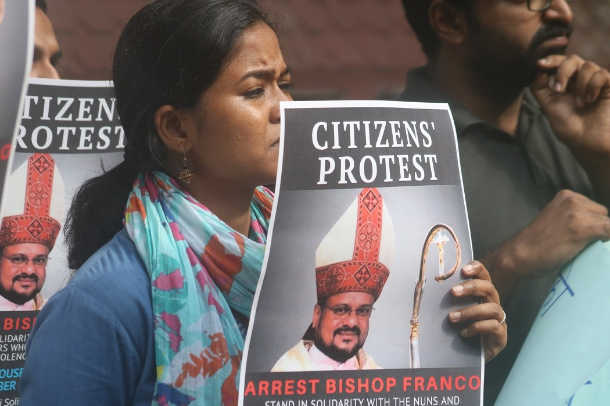 New Delhi protestors on Sept. 21 calling for the arrest of Bishop Franco Mulakkal of Jalandhar. Bishop Mulakkal has been accused of repeatedly raping a Catholic nun between 2014 and 2016. (Photo by IANS)

A court in India's southern Kerala state Oct. 15 granted bail to Bishop Franco Mulakkal, who was arrested almost a month ago and charged with raping a Catholic nun.

The Kerala High Court granted bail on condition that the bishop, based in northern Jalandhar City, should not enter Kerala state other than to report once a fortnight to investigating police.

The prelate was also told to surrender his passport to the court to stop him from any attempt to leave the country.

His lawyer, Vijay Bhanu, told ucanews.com that securing bail was a "victory" for the bishop.

Bishop Mulakkal was arrested Sept. 21 after a 48-year-old nun of Missionaries of Jesus, a diocesan congregation under the prelate, complained that he raped her multiple times between 2014 and 2016 while he was visiting her convent in Kerala.

On Sept. 24, the bishop was taken into judicial custody.

On Oct. 3, the state court rejected his bail application because of "reasonable evidence" against him and the fact that police were yet to complete their investigation. The court found that bail might allow him to attempt to influence witnesses.

For 24 days, Bishop Mulakkal languished in custody in Pala, a town in Kottayam district where the alleged victim's convent is located.

The arrest of the bishop came after dramatic scenes in Kerala that included a street protest attended by five nuns from the alleged victim's convent who demanded the bishop's arrest.

The bail condition that he not to enter Kerala unless he was reporting to police was important, said a nun who supported the public protest, which ended soon after the arrest took place.

The Kerala native bishop could otherwise have easily influenced religious and political leaders in his favor in relation to the investigation, the nun said.

Lawyer Indulekha Joseph, a supporter of the nuns' protest, told ucanews.com that 90 days was the normal time law allowed for an accused to be kept in custody pending an investigation.

"The investigation officers had no objection to bail," she said.

"We are to assume that they have completed the investigation."

The lawyer said a new law passed in April made it mandatory for police to complete investigations within two months of a complaint being laid.

As the nun filed her complaint on June 28, the police should be required to submit their final investigation report quickly so Bishop Mulakkal's trial could begin.

To ensure speedy justice, the law also mandates completion of trials within two months. It further stipulates that all rape cases be finalized within six months.

The bishop was told he had to leave Kerala within a day of being freed on bail.

"But where will he stay is the biggest question," said a priest associated with the case, noting that the Vatican had not dropped his "title as the bishop of Jalandhar" despite removing him from administration of the diocese days before his arrest.

There was concern as to whether the bishop would go back to Jalandhar, said the priest on condition that he not be named.

The Indian Bishops' Conference secretary general, Bishop Theodore Mascarenhas, said appropriate authorities would decide on where he will stay and "what will he do."

"We will cross that bridge when we come to it," he told ucanews.com without elaborating on when a decision would be taken.

Correction: Upon initial publication the report used the term 'victim' where it should have instead stated 'alleged victim'. This article has accordingly been corrected in several parts. Ucanews.com apologizes for this error.