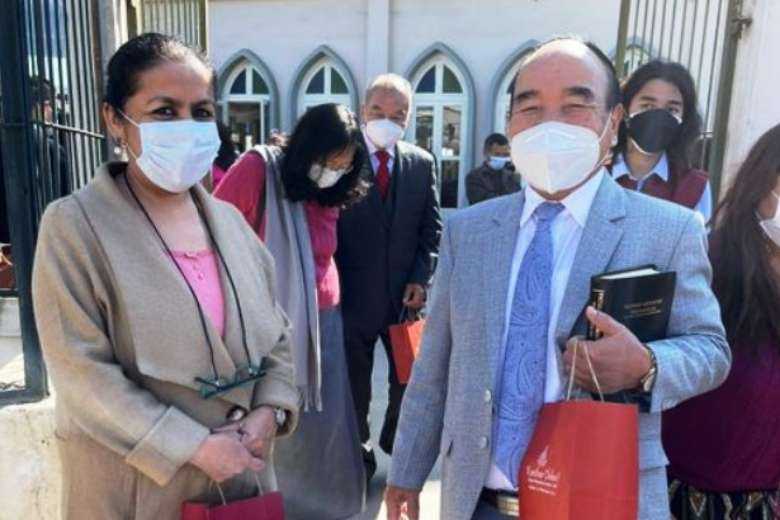 A self-proclaimed prophet in the northeastern Indian state of Mizoram has caused a stir by presenting a black shawl — a symbol of mourning — to Chief Minister Zoramthanga at a Sunday prayer service.

The episode took place at Zarkawt Presbyterian Church in the state capital Aizawl on Jan. 2.

Eyewitnesses said Zoramthanga was seated behind the church elders near the altar. At the conclusion of the service, he was approached by local prophet Lal Rinwama, who was seated in the back row with two men, and presented with a traditional Puandum or black shawl.

Zoramthanga did not resist as the shawl was being wrapped around him. However, he quickly put it down on the pew, they added.

Mizoram is a predominantly Christian and mostly Presbyterian state, but the tribal roots of its people ensure some superstitions continue, including the belief in local "prophets."

It is not known why Lal Rinwama, also known as Awmtea, chose to offer the symbol of mourning to Zoramthanga, a former insurgent leader who surrendered in 1986 to join mainstream Indian politics.

I apologize to the leaders and members of Zarkawt Presbyterian Church. Let the incident remind all of us of the sanctity of religious places

One person present inside the church later said that the chief minister looked “calm and not much disturbed.”

And yet reports of the incident reached all corners of the state, triggering a controversy.

The traditional Puandum is worn only on certain occasions, especially while offering condolences at the passing away of near and dear ones or during funeral processions.

The black shawl is also occasionally wrapped around a dead body, say locals.

Pu Kima, a resident of Aizawl, said the self-proclaimed prophet claims that whatever he does or says is as per “God’s instructions” and a small group of admirers and followers believe this to be true.

It is said that most of Lal Rinwama’s predictions have come true because he talks the language of God and carries the message of Lal Pa or God in the Mizo language.

Some believe the offering of the shawl to the chief minister signifies the sorry state of affairs in Mizoram due to the ongoing coronavirus pandemic.

Perhaps the prophet meant to mourn the 553 deaths reported in the state so far.

Or maybe, he wanted to highlight the plight of the thousands of Christian refugees from Myanmar — some 25,000 have sneaked into Mizoram in the last one year or so to escape the brutalities unleashed by its military regime.

“I am really sorry for what happened last night. I apologize to the leaders and members of Zarkawt Presbyterian Church. Let the incident remind all of us of the sanctity of religious places. Instead of trying to put the blame on anyone, our minds may be filled with the love of Jesus Christ and the expansion of his kingdom,” the chief minister wrote.

Not long ago, the self-proclaimed prophet had claimed that like Jesus Christ he too would rise from his grave on the third day of burial

A church leader told UCA News that the elders' committee was disturbed by the unpleasant episode and would be holding a meeting to devise ways to avoid a repeat inside the church premises.

Lal Rinwama is no stranger to controversies and seems to relish them.

Not long ago, the self-proclaimed prophet had claimed that like Jesus Christ he too would rise from his grave on the third day of burial.

In 2017, he was arrested along with a few followers for burning the Indian national flag and showing disrespect to an idol of a Hindu God.

Locals also recalled an old video of Lal Rinwama shouting in front of the gates of the chief minister’s official residence going viral on social media a few years ago.