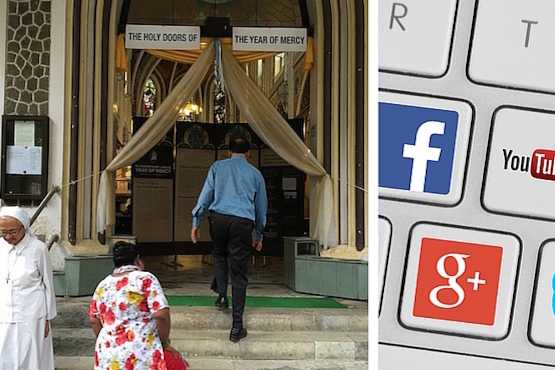 The cathedral in Mumbai Archdiocese is being kept open as part of the observance for the Year of Mercy. As another way to celebrate the year, an Indian priest is sending out Gospel reflections via social media that stress the message of mercy. (ucanews.com photo by Christopher Joseph/social media photo by pixabay.com)

A Salesian priest in western India is using social media to carry out his role during the Year of Mercy.

Father Leon Cruz, the only Salesian priest in India named a Missionary of Mercy, sends out Gospel reflections stressing the message of mercy to nearly 2,000 people of all ages and faiths around the world via his Facebook page.

The priest also manages two public Facebook groups to reach more people during the Year of Mercy, which Pope Francis declared last December and which runs through to this November.

A Whatsapp group he started three years ago has also helped him strengthen his groups with messages of mercy, Father Cruz said.

Through the Year of Mercy the pope has exhorted Catholics to observe it with works of mercy to experience God's forgiveness and unconditional love.

Father Cruz is also engaged in conducting retreats for young people and set up a music group called the Mercy Band.

"They are a group of energetic students who sing hymns, action songs…all related to the theme of mercy," he said.

Father Cruz applied to be a Missionary of Mercy with a recommendation to the Vatican from the provincial of his Mumbai province last August.

"Initially I had little idea of what it would entail being a Missionary of Mercy," said the priest.

Some 1,000 priests have been named Missionaries of Mercy from around the globe. Each of them received a special papal mandate to be unique signs of God's mercy. They also have the authority to pardon grave sins that carry penalties that only the Holy See can forgive.

Such sins include desecrating the Eucharist, physically attacking the pope, a priest absolving a partner in a sexual sin in confession or a priest directly breaking the sacramental seal of confession. Normally, when one confesses these sins, the confessor should ask permission from the Holy See to lift the penalty so as to be able to absolve the sin.

"By giving these faculties to the Mercy Missionaries, Pope Francis is essentially facilitating the path for people to have these sins forgiven, so that during the Jubilee of Mercy those carrying around the weight of the sins and penalties could be forgiven and restored to grace," he said.

Father Cruz said his first priority is to make sure he is available for confessions. He has already spoken to Cardinal Oswald Gracias of Mumbai about his availability for the archdiocese, one of the largest in the country, spread across Mumbai, India’s largest city.

When invited to parishes, Father Cruz conducts a service called "Mercy Evening" with reflections on mercy, singing, prayers and confessions.

In the coming months he along with his team, plans to organize interactive sessions on the theme of mercy for the various pious associations and youth groups in the archdiocese.