A file photo of Jharkhand State’s Jesuit-run De Nobili School, whose vice principal and a nurse were arrested and detained Sept. 10 on allegations of child sex abuse. (Photo supplied)

A Catholic priest and a nurse working at a Catholic school in India’s eastern state of Jharkhand have been held in custody after being charged with sexually abusing a 9-year-old girl.

Father Julian Ekka, the vice principal of the Jesuit-run De Nobili School in Koradih, Dhanbad district and the nurse, Emerencia Lomga, were arrested following a complaint from the father of the alleged victim, said district police chief Aman Kumar.

According to police, the fourth-grade girl was taken to the sick room after she complained of abdominal pain a month ago.

The priest and the nurse were present in the room and police say a medical examination proved the child had been sexually assaulted. Based on “circumstantial evidence,” both were arrested after officers interviewed some staff members, Kumar said.

The two were produced before a court Sept. 10 and remanded in custody pending further inquiries. They have been charged with violating several clauses of a stringent law relating to sexual offenses against children, the Protection of Children from Sexual Offences Act. Offenses under this law are non-bailable.

Church people in the state, where the pro-Hindu Bharatiya Janata Party (BJP) runs the government, say the case was fabricated amid a hostile atmosphere being generated toward the state’s Christians, mostly tribal people.

Father Jerome Sequeira, assistant provincial of Jesuits in Jamshedpur province, told ucanews.com they had studied the case and found the “priest and the nurse innocent” and “in no way connected to the child abuse case.”

He said the child complained of abdomen pain on Aug. 8 and the nurse took her to the sick room, where she treated her before calling her parents, and sending her home with them.

“It is her father who named the priest, nurse, and the class teacher in the complaint,” the priest said. 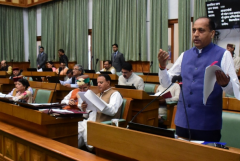 Police first went to the school Sept. 6 and detained the nurse the following day. She was interrogated for 48 hours and her arrest was not officially recorded until Sept. 9.

Father Ekka, a local tribal priest, was arrested Sept.10 and both were produced before the court the same day.

Jharkhand has a history of targeting Catholic priests and their institutions.

Another Jesuit, Father Alphonse Aind, was jailed for life in connection with a gang-rape case in June 2018. He is still languishing in a cell as his appeal against conviction is pending in the state court.

Missionaries of Charity Sister Concelia Baxla was arrested and jailed on charges of child trafficking in July 2018. The courts have repeatedly refused her bail, keeping her behind bars.

Catholic priest Father V. J. Binoy and catechist Munna Hansda were arrested and jailed from Godda district in early September following allegations that they violated the state’s anti-conversion law and grabbed the lands belonging to a tribal man.

“They have all been framed for political gains,” said Father Anand David Xalxo, the spokesperson for Ranchi Archdiocese in the state capital.

A mob of some 500 suspected Hindu hardliners vandalized a Jesuit mission state Sept. 3 but the police have still not yet arrested them, even after mission officials named more than 25 of them in a complaint.

Church leaders blame hard-line Hindu groups, who support the ruling BJP’s ideology of Hindu nationhood, of engineering these incidents to intimidate and defame Christians and their institutions in an attempt to keep local tribal people away from them.

The Church’s mission to educate tribal people has resulted in hundreds of them accepting the Catholic faith, resulting in a stronger Christian community in the state.

Jharkhand has about 1.5 million Christians — or 4.3 percent of the population — almost double the 2.3 percent figure for India as a whole. Tribal people constitute 16 percent of the state’s 32 million people.