A Catholic priest accused of fraud in the central Indian state of Madhya Pradesh has been released from jail after spending 50 days behind bars.

Father Anand Muttungal, the former public relations officer of Bhopal Archdiocese, was arrested on Dec. 11 by Economic Offence Wing (EOW) officials at his residence and produced before a special court the same day and later sent to jail.

The priest was given bail on Jan. 28 and after church officials produced the necessary documents he was released from jail on Jan. 30.

Father Muttungal had to pay a surety of 50,000 rupees (US$700) to Bhopal District Court and will have to attend the court as directed.

The case was registered against the 47-year-old priest and seven others on Oct. 17 at an EOW police station in Bhopal, the state capital, two years after a complaint was lodged against them by a group of laypersons.

G.G. John and others accused the priest in their complaint lodged in April 2017 of duping 377 persons after promising residential plots through a housing society, St. Jude Colonizers, formed under his initiative as a church public relations officer. The society was formed in 2009.

Other members of the society named in the forgery case are Roy John Thatta and Vipin Toppo.

The police’s preliminary findings say the priest allegedly conspired with Toppo and Thatta, one of his employees, to dupe homebuyers. 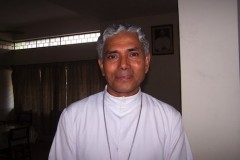 In a separate case in 2013, Father Muttungal filed a police complaint alleging that Archbishop Leo Cornelio of Bhopal and two priests had conspired to make him mentally unstable through slow poisoning. The case is still pending before a court.