Young priests of the Carmelites of Mary Immaculate congregation join in carrying the coffin of Father Martin Vazhachira, when it arrived at his ancestral home in Kerala Aug. 4. (Photo by T.K. Devasia)

Uncertainty about how a young Indian Catholic priest died in Scotland continues as his body was brought to his native state of Kerala for burial, 43 days after he was found dead on a beach.

The body of the 33-year-old Carmelites of Mary Immaculate Father Martin Vazhachira was flown to Kochi Aug. 3 and taken to his ancestral home in Alappuzha district. Thousands of people thronged the home to pay their last respects.

He was buried Aug. 4 at the congregation's cemetery in Kottayam district following a service that included bishops, priests and nuns.

Many have expressed dismay over the lack of information about the circumstances of the priest's death.

The priest went missing on June 20 and three days later his body was found on the beach in Dunbar, about 45 kilometers from St. John the Baptist Church in Edinburgh, where he was serving.

Father Vazhachira was ordained a priest in 2013 and traveled to Scotland in 2016 to do his doctorate and where he also served the parish.

The priest's younger brother Vazhachira Thankachan told ucanews.com that authorities in Scotland did not reveal details about their investigation when contacted by family members.

"It is not fair on our part to comment on the cause of the death before the findings of the investigation is known. Church officials at Edinburgh are closely following up on the case. We hope to hear something definite within a month," Thankachan said. 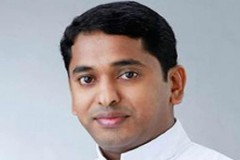