Indian priest convicted of abuse may be defrocked 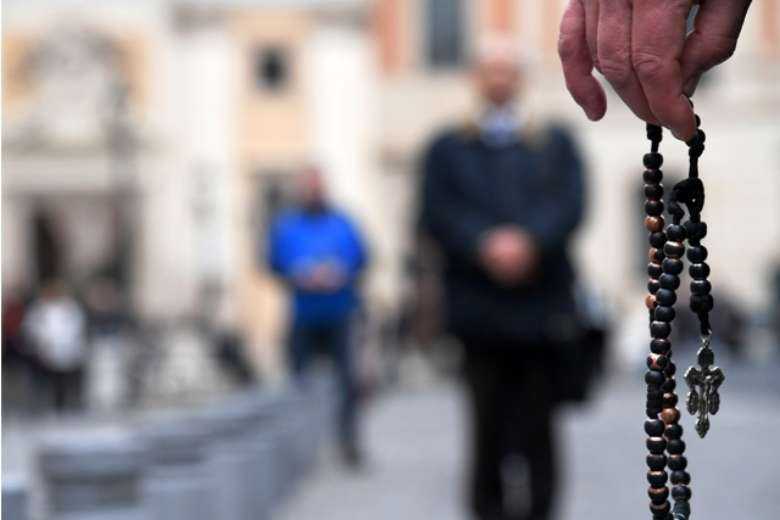 Members of the international coalition of lay people "Acies Ordinata" hold a rosary at a demonstration to denounce what they call a "Wall of Silence" regarding child sexual abuse within the Catholic Church, in Rome on Feb. 19, 2019. (Photo: AFP)

Indian Cardinal Oswald Gracias has recommended the Vatican to resume canonical procedures against a Catholic priest who was convicted of sexually abusing a minor boy.

Father Lawrence Johnson, 55, a priest of the Archdiocese of Bombay (now Mumbai), was sentenced to life imprisonment by a special court dealing with sexual offenses against children on Dec. 29.

The priest was also charged with violating several sections of the Protection of Children from Sexual Offences (POCSO) Act.

Cardinal Gracias, who is also the archbishop of Bombay, in a statement on Dec. 31 said that “as the case has been concluded in the courts, I am recommending to the Roman Offices that the canonical proceedings which were suspended due to the ongoing hearings be now resumed.”

Father Johnson was arrested on Dec. 2, 2015, and charged with having engaged in “sexual activities against the order of nature” with a boy who was 13 years at the time.

Soon after the priest was arrested archdiocesan spokesperson Father Nigel Barret told UCA News that the archdiocese will send the results of its investigation to the Vatican to determine the canonical action. If found guilty, Father Johnson will be defrocked or laicized, he said.

It was the first publicly reported case of clergy sex abuse after November 2015, when the Church in India put in effect a Vatican-approved procedure to deal with allegations of sex abuse by Catholic clergy.

The current Vatican procedure provides for immediate suspension of a priest from clerical order if a diocesan legal process finds him guilty of sex abuse.  Father Johnson’s “faculties for public ministry were withdrawn” soon after the allegations surfaced and “the same situation continues,” Father Barret told UCA News Jan. 4. He said the canonical process against Father Johnson was suspended so that it may not hinder or influence the criminal case against him in the civil court. “Now that the civil court has concluded its procedures, we have resumed the canonical process,” he said. The boy’s parents had registered a complaint with police alleging the priest had enticed the boy into a room after the prayers on Nov. 27, 2015, and sexually abused him. Medical examination of the victim four days later confirmed a sexual assault.

The parents also accused the church authorities of trying to hide the crime and protect the perpetrator. But Church officials have denied the allegations.

The cardinal clarified that he had to leave for Rome hours after the complaint was registered and hence delegated an auxiliary bishop to contact the police, supervise the hearings and keep in touch with the family.

“Our records show that the Church hearings began the very next day after the complaint was filed. Father Lawrence was arrested the same night and the priests were asked to meet the family,” said Cardinal Gracias.

He further said that several invitations by his secretary to the victim’s parents to discuss any assistance to the victim got no positive response. “This invitation still stands,” he assured while informing that recently the victim was admitted to a Church institution at the intervention of his office.

“I continue to pray for the victim and the family. I understand their pain, anguish and anger. I wish that they will experience healing and peace. I also pray for Father Lawrence Johnson,” said Cardinal Gracias in the statement.

The cardinal said he “deeply sympathized” with the victim and his family even as he was “very distressed” to learn about the priest’s conviction for “aggravated sexual assault on a minor.”

“I ask pardon that a representative of the Church, appointed to be in charge of the community, was responsible for this,” he said.

Indian bishops at their biennial gathering held in the southern Indian city of Bengaluru in February 2019 had pledged to follow zero tolerance for any act of sexual abuse in the Catholic Church.

They also agreed to take necessary disciplinary action against offenders irrespective of their standing in the Church if they are found to have committed the offense.

The bishops also emphasized the need to show compassion and care for the victims of such abuse and to help instill confidence in them to lead a new life.

The prelates had agreed to “constitute an appropriate mechanism with necessary infrastructure and time-bound procedures to redress cases of sexual abuse” leading to immediate relief for survivors who otherwise face discrimination and humiliation from society.

This story was updated with additional quotes on Jan. 4.

DES COUTINHO
Tis the Indian way. Name and shame a low level sub inspector or jawan and reward senior officers. I'll lay a bet with UCA Bishop Franco will be found not guilty. He'll be promoted and feted. And the nuns who showed gospel values will continue to be punished with canonical process. Brood of vipers....
Reply

GAIL
Frankly, I don't believe these nuns. We always blame the priest; what about the sins of the nuns? A once-only rape I can believe, but repeated incidents? Not likely. "If she did not shout (raise the alarm and call for help) she should also be stoned."

LADISLAUS LOUIS D'SOUZA
Your reference to 'Bombay' as 'now Mumbai' is faulty in the present context. To clarify, while MUMBAI is the name of the metropolis which is the capital of the State of Maharashtra, BOMBAY continues to be the name of the Archdiocese which includes Mumbai and extends up to Raigad.
Reply