Indian priest claims he was abducted at gunpoint by police 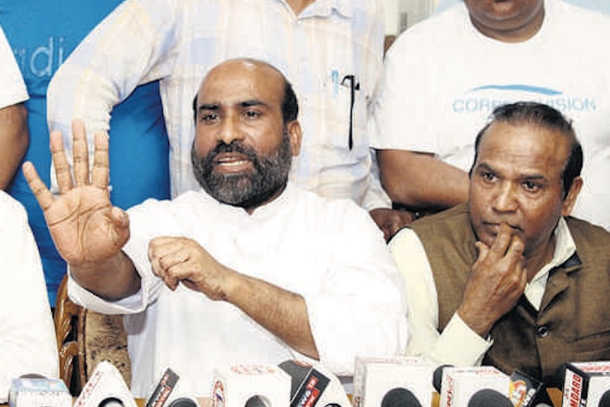 Father Antony Madasserry, superior general of the Franciscan Missionaries of Jesus, addresses a press conference in Jalandhar on March 31 after he was accused of keeping unaccounted cash. (Photo supplied)

Church officials in India’s Jalandhar Diocese have disputed a police claim that currency worth about US$1 million in unaccounted cash was recovered from a Catholic priest.

Father Antony Madasserry, superior general of the Franciscan Missionaries of Jesus, was arrested along with five others on March 29 after 66.5 million Indian rupees in cash was recovered from three of his vehicles, police said in a statement.

The vehicles and cash were handed over to the Income Tax Department and the Enforcement Directorate, Hans Raj, deputy superintendent of police in Khanna district, told ucanews.com.

All six people were released after questioning, Raj said.

He claimed police took away currency worth US$2.2 million at gunpoint from the residence of Father Madasserry, who heads the diocesan congregation for men.

Police documents showed less than half of what they took. “It was a loot by the police, not recovery of unaccounted money,” Father Kavumpuram said.

The accused priest is a partner in a company that provides books, stationery, uniforms and security services to schools in Jalandhar. The diocese runs some 100 schools in the state.

The money, collected from students for services, is “fully accounted with bills and receipts,” Father Kavumpuram said.

He said the diocese is not involved in the issue as it is between a private company and police. The accused is also not a diocesan priest.

The diocese was plunged into controversy in June last year when a nun complained to police that Bishop Franco Mulakkal of Jalandhar raped her multiple times between 2014 and 2016 when he visited her convent in Kerala.

The bishop continues to face investigation. The Vatican removed him from diocesan administrative duties last September but he retained his title as its bishop.

The nun who complained is a former superior of Missionaries of Jesus, the diocesan congregation started by Bishop Mulakkal’s predecessor, Capuchin Bishop Symphorian Keeprath.

Following the rape allegation, Bishop Mulakkal was accused of dabbling in money by managing corporate business using his priests.

But his supporters say the self-financed schools run with money collected from students and the income is spent on education and other development work undertaken by the diocese.

Father Madasserry, a former diocesan priest, said in a press statement that his company has collected US$4.32 million from schools this year and US$2 million has been deposited in banks.

He said 40-50 police officers armed with guns and without any search warrant took away the money. They did so in the presence of bank officials who were counting the money to be taken to the bank on the last working day of the financial year, the release said.

The police “forcibly abducted me and others in my residence at gunpoint,” the release said. It also alleged the police came from outside their district and local police were not informed.

The priest said they have complained to police officials and the state’s chief minister about the alleged illegal actions of officers.

Raj said Father Madasserry has to prove to the Income Tax Department that the recovered cash was accounted for. “He is free to say anything at this point of time,” he added.