Sister Abhaya's body was found in a well at a Kerala convent in March 1992.

Kerala High Court has accepted a Catholic priest's appeal against a special court convicting him of the murder of a Catholic nun 28 years ago.

The top court in the southern Indian state accepted the appeal of Father Thomas Kottoor on Jan. 19 and served a notice seeking the response of the Central Bureau of Investigation (CBI), the federal agency that investigated the case. A special CBI court on Dec. 23 sentenced Father Kottoor and Sister Sephy to life imprisonment after convicting them of the murder of 19-year-old Sister Abhaya and dumping her body in a convent well in 1992.
Subscribe to your daily free newsletter from UCA News
Thank you. You are now signed up to Daily newsletter
The conviction document said the priest and nun committed the crime to cover up their sex act, which the younger nun accidentally saw while collecting drinking water on the morning of March 27, 1992. Sister Abhaya's body was found in the well of St. Pius Convent in Kottayam district that morning. The priest and nun were also found guilty of destroying evidence and conspiracy, among other charges. However, Sister Sephy has not yet appealed against her conviction.Father Kottoor's appeal said the special court's judgment was "improper and incorrect" as it relied on evidence given by three unreliable witnesses and was based on an unfounded story.The trial court did not examine the evidence he had submitted that proved his innocence.The judgment document was "a beautifully drawn screenplay based on fiction," and if it were allowed to be sustained, it would be "a travesty of justice," the priest's appeal reportedly said.
Related News 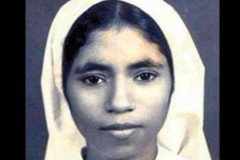 The priest filed his appeal on Jan. 18 and judges agreed to examine the trial court's order.However, the High Court has not stayed the trial court's order, so the priest and nun will have to remain in prison.Father Jacob Palackappilly, the deputy secretary of Kerala Catholic Bishops' Council, confirmed the appeal. "There is nothing special about. It is a legal process available to citizens," he told UCA News on Jan. 20.Father Kottoor has "the right to appeal against the order in High Court, the top court in the state, and then, if not satisfied with it, to the Supreme Court, the top court in the country," Father Palackappilly added."Until the Supreme Court upholds the trial court's order, the priest has the right to challenge it," he said.He hinted that Sister Sephy will also file an appeal against the trial court's verdict. The Abhaya case is one of the longest-running murder cases in the history of Kerala state. State police initially concluded the case was a suicide. However, the case was later handed over to the CBI following demands from the junior nun's family members and the public.
Support our Catholic journalism with a contribution of any size
Your contribution will help the Catholic journalists and editors in UCA News to report news, features, commentaries, video stories and podcasts on issues affecting the lives of millions of Catholics around the world.
Here is a gift of two valuable books as a token of appreciation to you.
Check your mailbox for links to these PDF/e-Books.