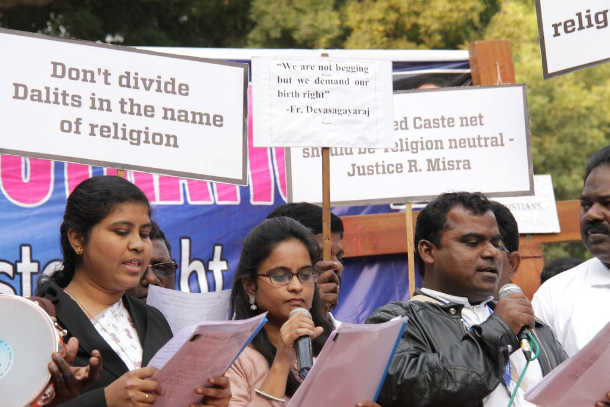 The chief minister of the southern Indian state of Andhra Pradesh has said his government will not tolerate police brutality against Dalits.

Y.S. Jagan Mohan Reddy’s remarks came after a series of incidents in which Dalits were abused by police and a Dalit youth lost his life due to police action.

“Dalits and minorities are always at the receiving end, whether at the hands of high society, the community, elite groups and the government, so police brutality against them is nothing new,” Father Vijay Kumar Nayak, secretary of the Indian Catholic bishops’ office for Dalits and lower classes, told UCA News.

“Of late Dalits, who are the most vulnerable community in society, have been subject to more atrocities — so much so that even our president has taken note and ordered an inquiry into the head-shaving case this month.

“President Ram Nath Kovind asking the federal ministry of social justice to handle the case on an emergency basis means not only he but the nation is aware of the injustice done to Dalit people.”

Meanwhile, in a video conference with state police officials, Reddy said policemen will be held accountable irrespective of their stature if they treat Dalits inappropriately.

“Our government is taking action and arresting policemen who mistreat Dalits. Our government has investigated cases in a transparent manner and has booked accused policemen under the Scheduled Caste and Scheduled Tribe Atrocities Act,” Reddy said.

The chief minister has called for orientation programs for police officers where they can be sensitized against caste bias, reported the New Indian Express.

The forced tonsuring of Vara Prasad in East Godavari became national news. Prasad’s head and moustache were shaved on July 22 by police even though he claimed innocence.

In another case, Dalit youth Yericharla Kiran died in police custody in Prakasam district after he was detained for allegedly failing to wear a face mask on July 18.

Atrocities were also reported in neighboring Tamil Nadu state on June 23 after a 63-year-old father and his 31-year-old son from Sathankulam were allegedly killed in police custody.

“Incidents like the head shaving are a shame and any officials involved in cases like this will face dire consequences. Everyone should keep this in their mind in this regard as we have put accused officials behind bars,” Reddy said.

Father Anthoniraj Thumma, executive secretary of the Federation of Telugu Churches, told UCA News that some cases in India were similar to the killing of African-American George Floyd by a policeman in the US.

“Atrocities against Dalits have not come down much since Jagan became chief minister despite appointing a Dalit woman as home minister. Local police are manipulated by politicians in support of dominant perpetrators of violence,” Father Thumma said.

“Hence, the stern warning given by Jagan was timely and much needed. Hopefully he will follow it up by checking police and politicians and break their nexus.”