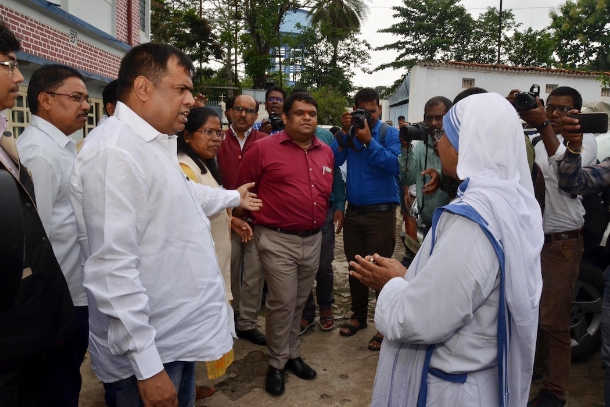 A nun from the Missionaries of Charity receives a delegation from the National Commission for Protection of Child Rights on its visit to their house in Ranchi, capital of Jharkhand state on July 24 as part of a probe. The house was accused of selling babies resulting in the federal government ordering the inspection of Missionaries of Charity homes across the country. (Photo by IANS)

Officials probing more than 80 Indian Christian institutions in eastern Indian Jharkhand state have recommended a federal investigation on fund diversions, which church leaders say is an attempt to project Christians as law breakers.

Since July, the state has been investigating 88 Christian organizations, including those managed by various Catholic dioceses and religious congregations such as Jesuits, Salesians and several groups of nuns. They are accused of diverting overseas donations to help win converts.

Senior CID official Ajay Kumar Singh, in a report submitted to the chief of state police, claimed irregularities in the financial transactions of these institutions and recommended an in-depth federal probe, the newspaper reported.

The CID has completed investigating 10 of the Christian organizations involved and found there were "suspicious cash transactions" involving of millions or rupees. It also found that funds were being used illegally for religious promotional activities as well as in the providing of inaccurate information to the government, the news report stated.

An Indian law, the Foreign Contributions (Regulations) Act stipulates that overseas donations must be received through a government regulated system and used strictly for defined purposes.

Audit reports must be submitted to the government annually, the law stipulates.

However, Bishop Theodore Mascarenhas, secretary general of the Indian bishops' conference, maintained that church organizations have been strictly following the law and the recommended further probe was a clear case of harassment.

Bishop Mascarenhas said that the state administration, run by the pro-Hindu Bharatiya Janata Party (BJP) that also rules nationally, has been targeting Christians because they work for the weakest sections of society.

He and other Christian leaders accuse the BJP of supporting the ideology of Hindu upper caste domination and trying to stifle minority groups such as socially poor Dalits, formerly known as untouchables, and tribal villagers.

The regional bishops' council of Jharkhand has also slammed the government, describing the allegation of funds being diverted for proselytizing as baseless.

The bishops challenged the government to provide evidences to substantiate the claim.

"We are being probed for charges that are not substantiated with facts and figures," Archbishop Felix Toppo of Ranchi, the state capital, told ucanews.com.

He said investigations were also aimed at "maligning and defaming" Christian organizations to "project us as law breakers" and drive people away.

Christian leaders say the government and hard-line Hindu groups target Christians to project themselves as champions of Hindu interests to garner Hindu votes at forthcoming national and state elections.

Violence against Christians has increased since BJP-led governments came to power in the state and in New Delhi, in 2014, as Hindu groups with tacit administrative support stepped up efforts to turn the country into a nation dominated by Hindus, Christian leaders say.

Indigenous people constitute 16 percent of the 32 million people in Jharkhand.

The state has about one million Christians or 4.3 percent of the population. Its Christian presence is almost double the 2.3 percent figure for India as a whole.