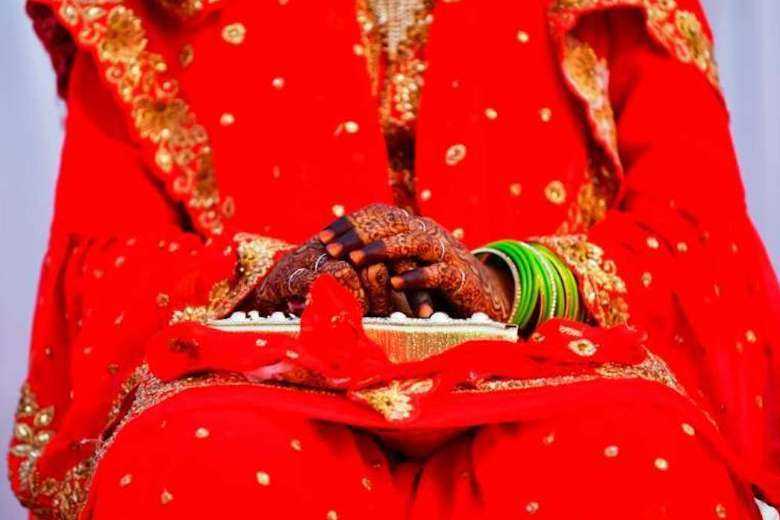 A bride with her hands decorated with henna dye at a mass marriage event in Mumbai, India. (Photo: AFP)

Police have launched an investigation into the marriage of a Protestant couple after Hindu activists claimed the bride was a Hindu converted to Christianity in the central Indian state of Madhya Pradesh.

Hindu extremists barged into the marriage reception in Indore town on Sept. 29 evening and disrupted the function.

Even though the families of both bride and groom denied the allegations, the ruckus led to the police being summoned.

“The couple and their family members were taken to the police station. The allegations of the Hindu activists were found to be false and they were let off,” Pastor Patras Savil, who is based in Indore, told UCA News on Sept. 30.

“The newly wedded couple are Christians and their marriage reception was disturbed based on a false allegation of religious conversion.”

No one from either family spoke to the media about the incident, apparently out of shock and fear.

Police have started a probe into the marriage based on a complaint from an office bearer of Vishwa Hindu Parishad and Bajarang Dal, right-wing Hindu organizations opposed to Christians and their charitable work.

“It is very sad that Christians are simply targeted for their faith,” said Father Maria Stephen, public relations officer of the Catholic Church in Madhya Pradesh.

“There has been a rise in attacks on Christians since the state amended a more than three-decades-old anti-conversion law in January. The new anti-conversion law has given unbridled power to destructive elements so that now they can accuse anyone of religious conversion without even providing one iota of proof.”

The law makes it mandatory for the accused to prove their innocence rather than seeking primary evidence from the accuser before proceeding with the charges.

It also has stringent provisions such as a 10-year prison sentence if a charge of religious conversion through allurement, force or coercion is proved.

“Now the situation is such that any Christian can be trapped in religious conversion cases, as happened in this marriage reception,” Father Stephen said.

“When such false news is publicized, animosity is created between people and disturbs public harmony. Everyone should respect each other and maintain social harmony for the future of the nation.”

Christians in tribal-dominated Jhabua district in Madhya Pradesh are scared after right-wing Hindu groups launched a campaign demanding removal of churches from tribal land and action against priests and pastors, accusing them of religious conversion.

District revenue officials have started summoning pastors and priests to certify if they were converted to Christianity by force.

“Our pastors and priests are getting notices from the officials, besides threats from right-wing Hindu activists, to prove our faith in Jesus,” said Bishop Paul Muniya of the Protestant Shalom Church.

“We are seeking legal recourse against all such discriminatory actions. Nobody was illegally converted or built illegal churches as being made out against us.”

No law stops anyone from praying at home

The prelate clarified that Hindu activists are falsely claiming prayer rooms in the houses of pastors are illegally built churches.

“No law stops anyone from praying at home,” he said, appealing to people not to create mistrust and misrepresentation.

Hindu activists forced their way into a Protestant prayer service inside Satprakashan Sanchar Kendra, a Catholic media center owned and managed by the Society of Divine Word.

When police arrived, the Hindu activists complained that the Christians were involved in mass religious conversion despite the fact it was a simple prayer gathering.

Similar incidents have been reported from other parts of the state, where Christians are accused of violating the anti-conversion law “even when someone is helped out of charity,” said a Christian leader.

Christians account for less than 1 percent of the state's population of more than 70 million, while the national average is 2.3 percent of 1.3 billion people in the country.