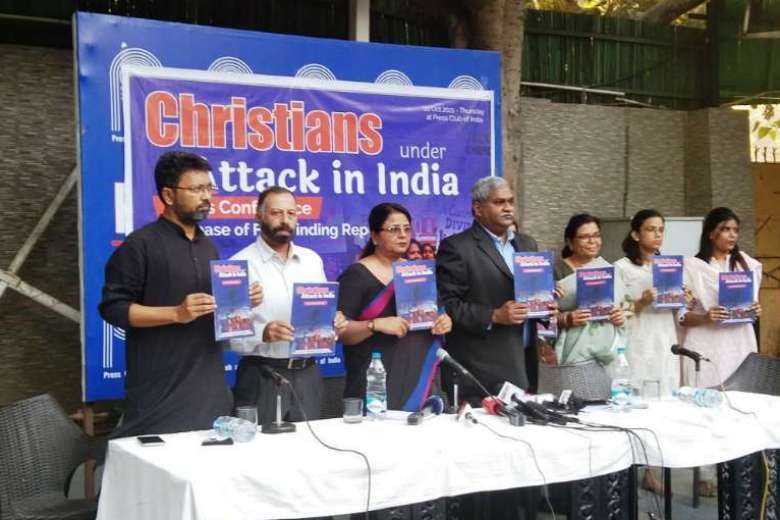 A fact-finding report on increasing violence against Christians in India is released at a press conference in New Delhi on Oct. 21. (Photo: Bijay Kumar Minj/UCA News)

A Catholic priest who tried to help two nuns illegally detained in last month’s Mau incident reported from the northern Indian state of Uttar Pradesh is planning to approach the high court to save himself from likely arrest.

“I am planning to move the state’s top court to discharge me from the case I was not involved in any way,” Norbertine Father Bartholomis Minj said, referring to the alleged violation of the anti-conversion law in Mau for which police took several Christians into custody following a complaint by a pro-Hindu group on Oct. 10.

Sisters Gracy Monteiro and Roshni Minj of the Ursuline Franciscan congregation were at the local bus stop when they were accosted by Hindu activists and forcibly taken to the police station on suspicion they were part of a Protestant group suspected to be involved in religious conversion.

Father Minj rushed to the police station after learning about the nuns' illegal detention. “When asked, I told the officers that I was principal of St. Joseph School and left the place after meeting the nuns,” he told UCA News on Nov. 11.

The priest later learned that the police had registered a case against a school principal without naming him. To his shock, a couple of days ago an officer came to his office and interrogated him for over an hour, prompting him to file for anticipatory bail before the district court.

The nuns were released the same day after the detained Protestants told police they were not part of their group.

“It is nothing but a clear case of harassment,” said Father Anand Mathew, a priest of the Indian Missionary Society based in Varanasi, Uttar Pradesh.

Their main targets were mostly small prayer halls run by the Pentecostals and other such groups, but emboldened mobs may soon start eying Catholics and other mainline churches, Father Mathew added.

He appealed to mainline churches to understand that their persecutors were merely “testing the waters” and may even come for their schools, hospitals and other service institutions even though they may not pose any threat to the fundamentalists.

Uttar Pradesh, which is ruled by the pro-Hindu Bharatiya Janata Party, has seen a rise in violence against religious minorities, especially Muslims and Christians, in recent years.

This year alone, Christians have been the targets of more than 300 incidents of violent attacks across the country, according to a fact-finding report released on Oct. 21 in New Delhi.

The report jointly compiled by civil rights groups also shed light on the targeted persecution of Christians in 21 of 28 Indian states under the guise of preventing fraudulent and forced religious conversions.