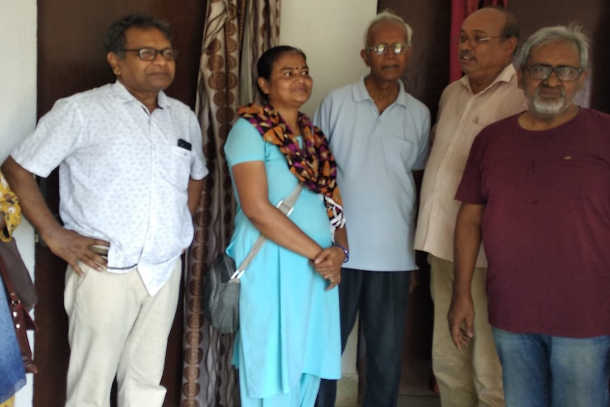 Police in India have for the second time in less than a year raided an octogenarian Jesuit charged over allegedly seditious links to Maoist rebels.

A police team, including officers from Maharashtra state in western India, raided the residence of 83-year-old Father Stanislaus Lourdusamy on the outskirts of Ranchi, capital of eastern Jharkhand state.

The Jesuit, popularly known as Stan Swamy, was charged along with nine other rights activists on Aug. 28, 2018 for alleged links to a banned Maoist group.

Father Davis Solomon, a colleague of Father Lourdusamy, told ucanews.com the police contingent, including 25 local police personnel, arrived 7.15 on the morning of June 12 without prior notice.

They cordoned off the priest's residence, which is located in a center for Jesuits.

During a three-and-half hour search, the police seized a computer hard drive, an internet modem and some other documents compiled by the priest, including details of a study he had done on persecuted Christians.

They also blocked the priest’s email and Facebook accounts.

Cyber experts accompanying the police team took his cell phone away and did something with it before later bringing it back, Father Solomon said.

The police team maintained that they did not need a search warrant as the raid was part of an ongoing investigation.

The priest was allegedly forced to sign documents in Marathi language of Maharashtra state, which he did not understand.

“When we objected they agreed to provide a translation within four days, but It is possible it could be manipulated,” Father Solomon said.

Father Lourdusamy in a brief statement to media said no substantial evidence has been provided to a court despite the long investigation.

“I have not received things that were seized last time. Yet one more raid. I am ready to extend full cooperation to the investigation if it is done according to the law. I also have full faith in our judicial system to find the truth,” his statement said.

Raid claimed to be unjust

The powerful tribal group, Jharkhand Janadhikar Mahasabha or the grand council of people’s rights in Jharkhand, in a statement said the moves against the priest was part of the government’s growing attempts to “stifle dissent and intimidate those who are fighting for justice.”

It said the priest had assisted tribal people to fight against tribal displacement, corporate looting of their resources and poor condition of prisoners awaiting trial

Some of the prisoners in the state prisons are those arrested in connection with Maoist violence.

"He is an exceptionally gentle, honest and public-spirited person," the tribal organization said in their statement.

Rights' group People’s Union of Civil liberties (PUCL) said a second raid did not stand up to objective scrutiny electronic and other evidence was collected during last year’s search.

The objective was to "intimidate" rights activists, democratically minded groups and concerned citizens from extending any type of support to the activist priest.

The priest had been documenting rights’ violations by state police and security forces, including the extensive use of torture, PUCL said.

Charges against Father Lourdusamy and the other activists came after police told a court in June that their investigations revealed a Maoist plan to assassinate Prime Minister Narendra Modi in a suicide bombing like the one that killed former Prime Minister Rajiv Gandhi in 1991.

Father Lourdusamy in a statement last September said his political activities led to “powerful interests” within the government laying the criminal charges against him.