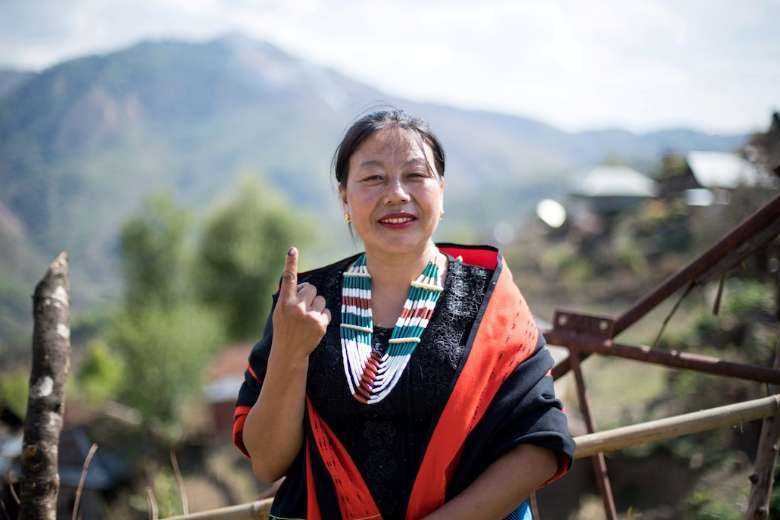 An Indian tribal woman shows her ink-marked finger after casting her vote for the first phase of India's general election in Ukhrul district in the northeastern state of Manipur on April 11, 2019. (Photo: AFP)

In the first phase that began on Feb. 28, elections were held for 40 seats, while polling for 20 constituencies in the hilly northeastern region will be held on March 5.

Initially, the first phase of voting was slated for Sunday, Feb. 27, but following protests from Christian leaders it was rescheduled to Feb. 28.

According to the last official census, Christians make up 41.29 percent of Manipur's population and Hindus marginally more at 41.39 percent. Muslims represent 8.4 percent.

However, Christians have a decisive say in 20 of the 60 seats in the hill state. In the remaining 40, native Meitei Hindus hold sway.

The BJP bagged a mere 21 seats in the 2017 elections. The Hindu party then came to power by forming an alliance with two smaller parties — the National People's Party and the Naga People's Front. The latter is essentially based out of neighboring Nagaland and draws its strength from the Christian Naga population.

Elections in Manipur and other northeastern states are guided by one strong factor — who is ruling in Delhi. We are in a state that sneezes every time Delhi gets a cold

In 2017, voters did not outright reject the Congress party as it won 28 seats and fell just short in three for the crucial majority mark.

But the BJP, resorting to power politics machinations, enlisted the support of two regional parties and a few independent legislators and put together a coalition government headed by Meitei Hindu leader N. Biren Singh.

In the run-up to the polls this year, the BJP inevitably dumped its allies and is now contesting all 60 seats on its own.

"We are confident we will win 40 plus," Chief Minister Biren Singh has stated several times in the election campaign.

However, several Christians like retired government servant Ningul Rin Kimi in the capital Imphal told UCA News that the BJP, which runs the federal government in Delhi, may gain votes but not because people support its ideology.

"In Manipur, people like to vote for a party that's in power in Delhi as cash-starved Manipur is immensely dependent on funding by the federal government,” Kimi said.

Kanhai Sharma, a Hindu in Imphal, agreed. "Elections in Manipur and other northeastern states are guided by one strong factor — who is ruling in Delhi. This always had a magnetic pull. We are in a state that sneezes every time Delhi gets a cold.”

In the first phase, Christian voters had no big say. "Our election for tribal-dominated seats is on March 5. We are voting for the Naga People's Front," said a Tangkhul Naga voter from remote Ukhrul district.

A good number of Tangkhul Nagas from Manipur's hilly region are in the militant National Socialist Council of Nagaland, whose general secretary Thuingaleng Muivah is a native Naga. This group has been engaged in peace talks with the federal government since 1997.

"So far three prime ministers have come and gone but the Naga peace talks are on. It is only the government of Narendra Modi that is showing good progress in parleys and now an accord is likely to be inked," said a BJP leader from Nagaland.

Several BJP leaders including Nagaland Deputy Chief Minister Y. Patton, a Christian, have visited Manipur during the last fortnight and have been busy wooing voters for the pro-Hindutva party.

Rio also campaigned for the Naga People's Front candidates on Feb. 16 and in his speech he also made a strong case for a solution to the Naga insurgency.

"This election is crucial for Naga unity," he told Naga voters in Senapati town amid reports that he had developed some differences with the BJP, though he runs a coalition regime with the saffron party of PM Modi.

We highlighted all issues and all their lip service and failures. The BJP will get a rude shock. My party's grand revival journey will begin with Manipur

One Naga leader close to Rio explained that in a country like India, elections cannot be decided or analyzed with one uniform brush.

"The Naga voters want a solution to the protracted insurgency that started in the 1940s. So do not be surprised if some Naga voters, though they are disturbed by the BJP's anti-Christian policies in mainstream India, vote for the BJP in Manipur or Nagaland with the hope that a solution will be hammered out soon," he said.

Analysts point out that even Congress and other parties did not make the BJP's antagonism towards Christians a poll issue.

Congress stalwart and former chief minister Ibobi Singh denies that the Congress campaign was too soft.

"We highlighted all issues and all their lip service and failures. The BJP will get a rude shock. My party's grand revival journey will begin with Manipur," he told a group of visiting journalists.

The BJP also avoided a major demand of the people — the repeal of the Armed Forces Special Power Act (AFSPA).

Manipur has been in the web of an insurgency for years and in 1958 the AFSPA was established, giving unbridled power to army personnel to search and shoot suspects.

The BJP avoided even mentioning the law in its manifesto and election campaign.

Congress leader and former federal minister Jairam Ramesh blamed the BJP for pre-poll violence. "Confident of its defeat, the BJP is indulging in pre-poll violence in Manipur," he tweeted on Feb. 16.

A businessman from Rajasthan summed up the situation. "On one side, they say the army should go and the AFSPA should be abrogated. On the other hand, most parties want central forces to be stationed everywhere in their house and party offices.”

He also pointed out that in both the 2012 and 2017 assembly elections, there were serious violent incidents and killings.